Odometer 39402
Trip Meter 312 miles
Saturday April 12, 2014
Another early morning, up at 7:30 and packed up and on our way by 9 AM.  We fueled up at the 76 station just outside the RV park.  The diesel cost $4 a gallon, and we were hoping that the convenience of filling here was not going to come at too high a premium. 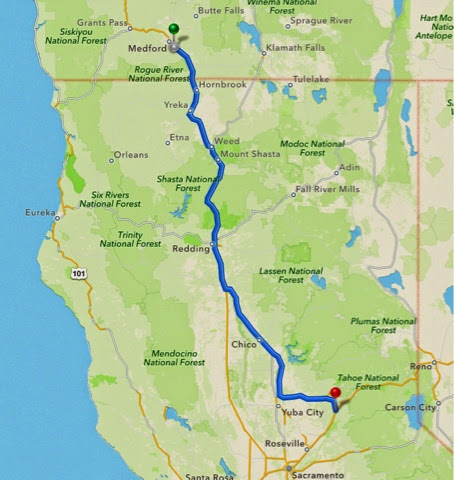 We decided that we would make a run into Medford, Oregon today, a distance of 312 miles, which is a little over our normal daily limit of 250.  In addition, some of the 312 miles would be on the same narrow winding two lane roads we have been traveling for the last 4 days  The off-set would be a run down the freeway once we got into Red Bluff.
We zoomed down I-80 to the west losing a lot of the elevation we gained last night when we climbed to 3000 feet from our turn off on Cal 49 to our RV park in Dutch Flat.  At Colfax we took a very confusing set of turns to get onto California Route 174, a little grey sketch of a line on our map, that would take us to Grass Valley- the end of California route 49, that we have been following since Oakhurst.  That little grey line was another huge challenge of tight switchbacks, steep up-hill/ down-hills and no shoulder, and steep drop-offs.   In other words - our kind of road!
On route 174, we passed by the Empire Mine State Historical Park, showcasing the richest hardrock mine in California.  Discovered in 1850 and worked over the next 106 years, the mine yielded 5.8 million ounces of gold.  We'll have to leave that for another time, today we are laying tracks.  The 300 plus miles to Medford will take us 7 hours if we don't take too long for lunch.
At Grass Valley, we took Cal highway 20 heading east and immediately hit a stretch of 4 lane road that was about 8 to 10 miles long before it reverted to a nice two lane road again.  We pretty much missed Yuba City heading instead north on route 149 to Oroville and eventually tying into highway 99 which took us into Chico.  On 99 north of Chico we stopped for a quick lunch at a weigh station turn out- then back on the road.  At Red Bluff we connected to I-5 and soldiered north to Anderson, Redding and Shasta Lake 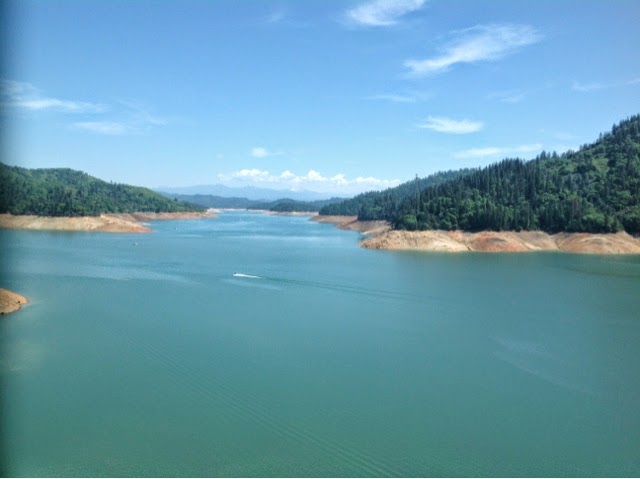 Shasta Lake is very low on water- as are most reservoirs and lakes in the west, but the boaters seem to be happy enough.
The rest of the trip into Medford remained uneventful, the high summits at Dunsmuir, Anderson Grade and Siskiyou Pass were challenging, but I remembered Mike Cody's advice from our Freightliner schooling last April- keep the RPMs between 17-1900 and the engine will climb all day without overheating.  Yep- he's right.  On Anderson Grade, Cal Trans is resurfacing the southbound lanes, so all the southbound traffic is re-routed into one of the northbound lanes, making it one lane each direction with a K-rail concrete barrier between the lanes.  The traffic seems to flow well, and other than going as slow as the slowest truck no problems.  It was on the down-hill section of Anderson Grade, falling towards the Klamath River that we noticed a disturbance on the other side of the barrier. At first it looked like a semi-truck was belching black exhaust, but as the truck sped past, we noticed an older motorhome off to one side- with smoke and flames pouring out of the front left wheel-well.
We were unable to stop to help- leaping the K-rail into oncoming traffic did not seem a good thing to attempt- so we called 911 to get emergency help coming.  Our hearts going out to those poor fellow travelers.  Fire is a motorhomer's worst nightmare.
We rolled into Holiday RV Park in Phoenix, OR at 4:15 PM and luckily had called for a reservation, because the park was full.  We got a great stream-side pull through! 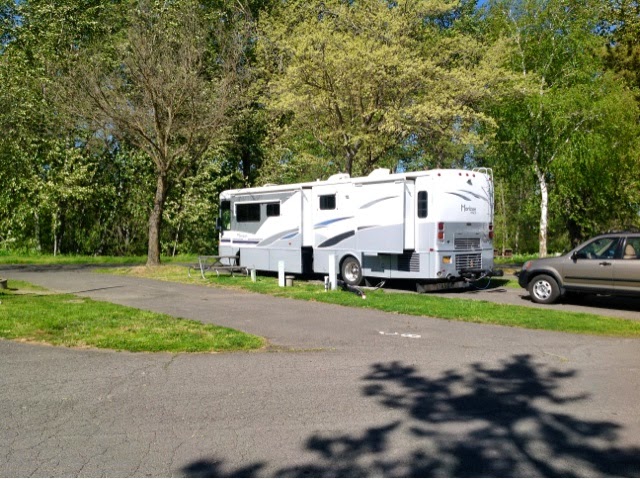 We are excited to see as many of our friends as we can in the next few days- then it's off to Port Orford and our summer place.
Home is where we park it!
Your Traveling Friends
Jeff and Joan
Posted by Jeff at 9:20 AM