Odometer 38963
Trip meter  243 miles
Monday April 7, 2014
We left Palm Springs and decided to take the back roads north- so we mapped out at route that would take us up California route 247 to Victorville and from there up 395 to Kramer Junction, then west on hwy 58 to Mojave.  In Mojave we found a Passport America RV park that cost us $15 for full hook ups- yeah!   In Mojave, we met our next door neighbors Tom and Marlys who are from the Portland Area.  We were instant friends and vowed to see each other down the road.
Tuesday April 8, 2014
We left Mojave at 9:30 AM and had only one choice of routes to get us west and that was to head west on Cal 58 to Bakersfield.  At Bakersfield our options opened up and we took Cal 65 to parallel Hwy 99 north.  The roadway was actually very good and CalDOT was in the progrss of making it even better by adding another lane each direction.  Unfortunately for us that meant 16 miles of 45 mph and no passing- so we went as slow as the slowest person wanted to go- you know the drill. 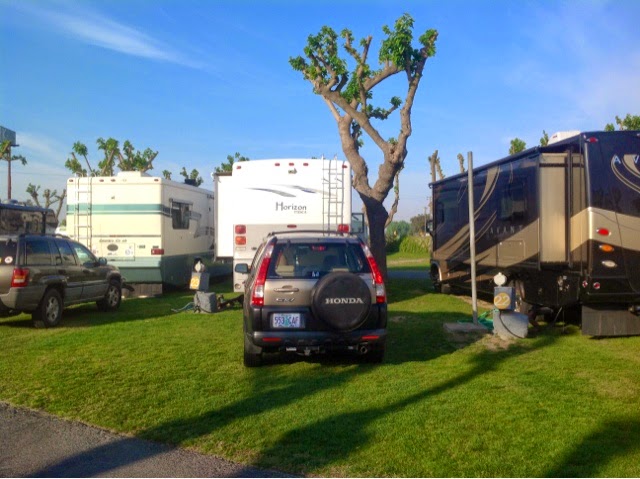 We got into Kingsburg south of Fresno at about 4 PM- a little later than we'd have liked, and checked into the Viking RV Park- It's a Passport affiliate which means 1/2 price- AND they say go ahead and wash your RV!!  I've been RVing a long time and never, ever, heard that before.  Sometimes they'll let you wash for an additional fee- but mostly no-way-Jose.  These spaces are TIGHT, we were within 3 inches of the tree trunk and within 4 feet of the neighbor to the left.   I got out the bucket and the ladder and washed and waxed the fiberglass roof- first time since last November.  While on the roof I noticed there was a big Sun Maid sign off to the east of us.  I'm a rasin fan.  Joan and I got to chatting with our neighbor in the black and tan Avanti.  Gord and Leslie are from Vancover BC, and we had a great time talking about trips we've made, RV adventures (fixing broken parts and systems), and the RV lifestyle.
The day has been warm- the readout on the dash has been on 90 degrees most of the afternoon, and it stayed warm through the evening and night- we mostly just slept under the sheet on the bed. This place is also very noisy!  Hwy 99 which runs in front of the park was non-stop traffic all night, and we discovered to our delight that the train tracks run on the backside of the park.  I stuffed earplugs in my ears so I could stay asleep.
Wednesday April 9, 2014
Jeff has a wild hare idea about skirting along the west edge of the Sierras instead of going up I-5 or 99 to Oregon.  Joan says okay,- so today we are going to take Cal 41 to Oakhurst - a gateway to Yosemite National Park, and in the foothills of the Sierra Nevada Mountains.
But first, I discovered last night that the Viking RV park in Kingsburg, Ca is right next to the Sun Maid Raisin Company- one of my all time favorite foods!  I didn't have to plead to long before Joan agreed to a quick visit to their company store.  Holy Cow! 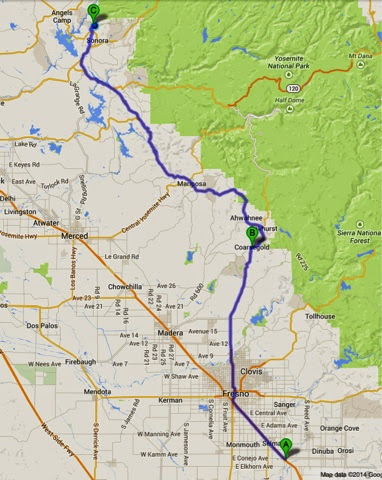 The map shows our route today- we were surprised that the road was really busy from Fresno to Coursegold, and we were pleased that traffic thinned out  as we headed north. 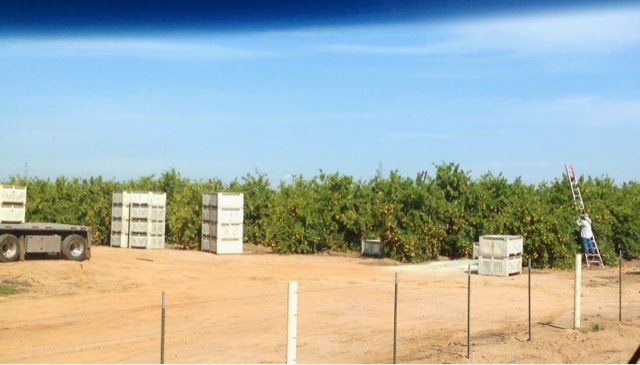 This is big citrus country and we saw lots of trees loaded with oranges.

Not surprisingly we saw lots of grapes too- gotta have grapes to make raisins. 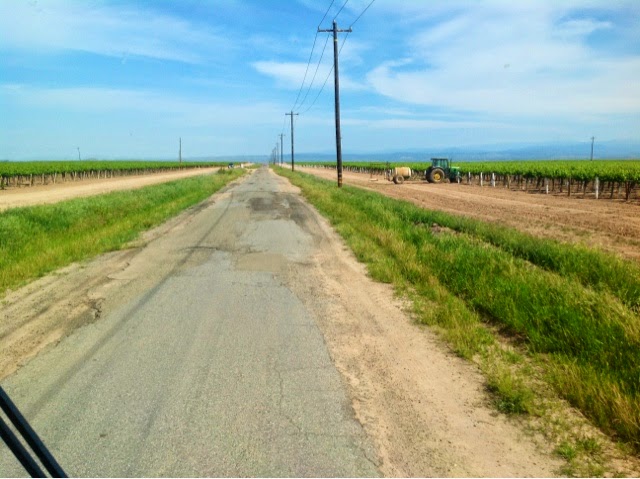 I took a wrong turn on Hwy 41.  The sign said Hwy 41 and showed a left arrow at the intersection- too late to look it up on the map.  We don't know what the hell that was about but we didn't drive back to look at the sign again- so we'll never know.  Not only that- we can't turn around and get back to the real hwy 41.  The GPS tells us to take road 39 1/2 to the right- Huh?  (who numbers a road 39 and a half?)  Well- we're getting farther an farther from our intended track so I take road 39 1/2- mistake #2.  The road starts out at nice 2 lane blacktop road, but that doesn't last long- within a 1/8 of a mile it is a one-lane cobbled asphalt and dirt farm road.  Arrugh!   Two and a half miles later (25 mph is all I can manage and I hear dishes breaking back behind me) we finally  reconnect with hwy 41.  Wow, 55 mph seems really fast to me now. 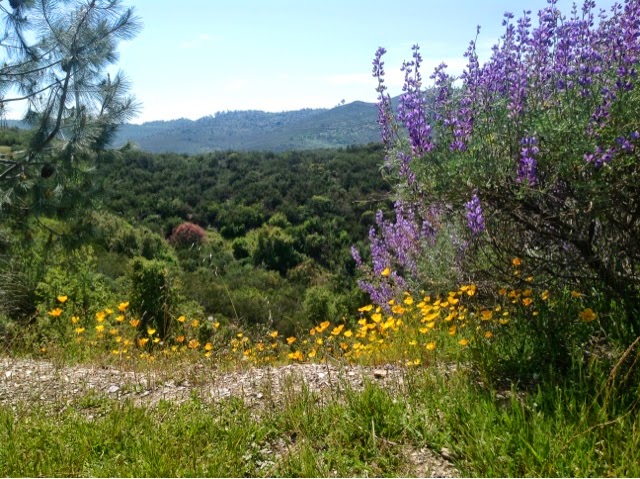 It isn't long before we start leaving the flat valley behind and the road starts to undulate, with the hills getting longer and steeper.  The scenery is beautiful- first wild flowers and blooming shrubs, then later oaks and pines- eye candy. 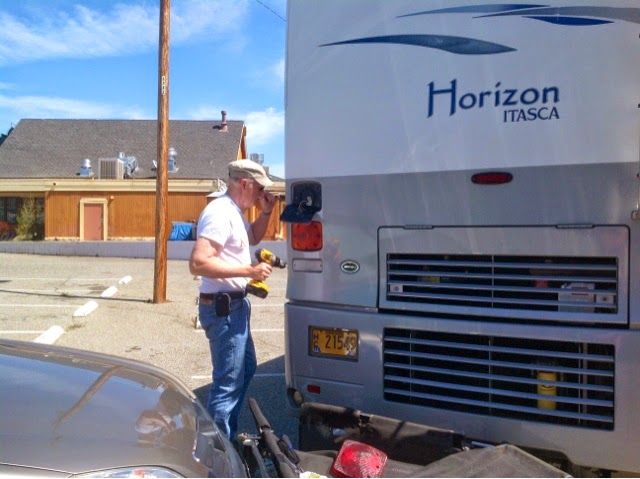 Just outside of Oakhurst a CHP pulls me over to tell me I've got a brake light out on the driver's side. No ticket, as we have 4 others (center and right on bus, and two on the Honda behind us).   I decided that we'd stop in Oakhurst and check it out.  It's a bad bulb, but in the process of changing it out I discover 2 screws are stripped out and the gasket is deteriorating.  Off to the auto parts store. We had lunch and did some grocery shopping before heading out of town to the north on Hwy 49. 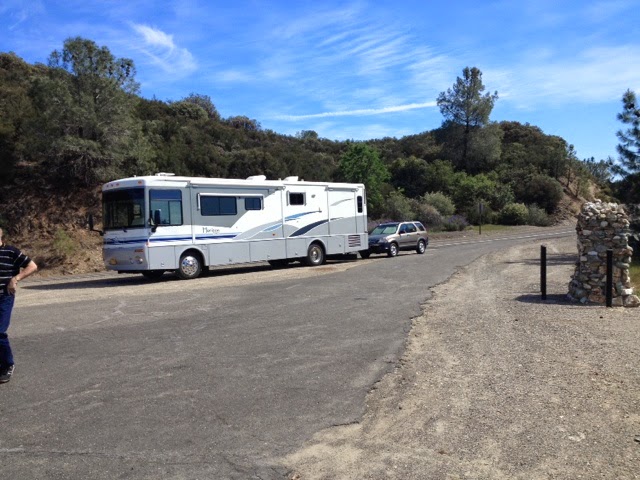 The hills are now getting thousands of feet tall and the curves are wrapped like spagetti.  Our top speed is 25 miles an hour in one very hairy 17 mile stretch north of Bear Valley- and Jeff is loving it! 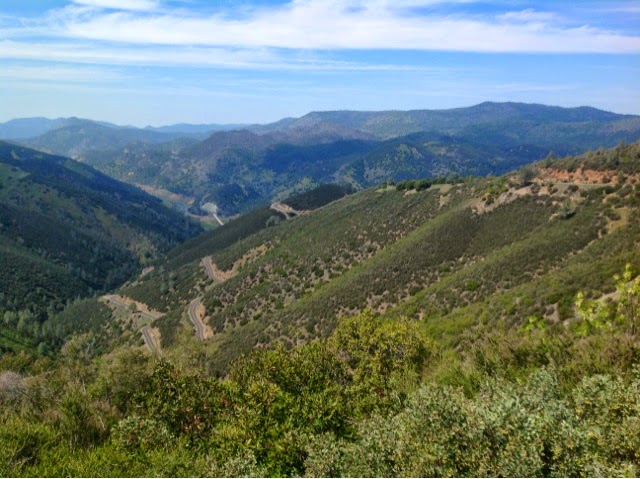 The engine brake is saving our brake drums from overheating on the long downhill 7-9% grades and switchbacks are so tight I can see the back of the Honda in front of us on a few of the corners!  The picture above shows the road switchbacking down into the Merced river valley below us. 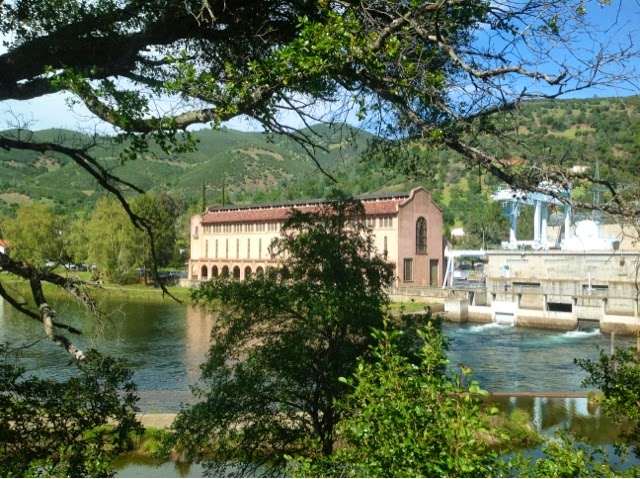 We soon pass by the Moccasin Powerhouse in Tuolumne County which gets it's water from the Hetch Hetchy reservoir, one of three powerhouses here,  owned and operated by the City of San Francisco 130 miles away. 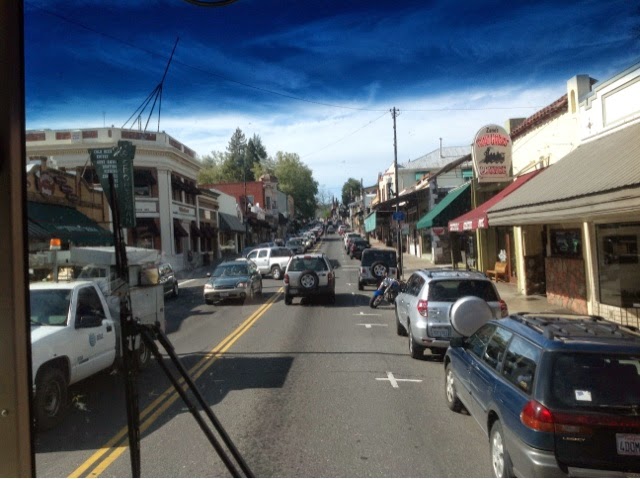 We are getting close to our destination for the evening, but first we have to traverse the Main Street of Sonora.  Traffic is snarled, and several times we have to watch our mirrors as we pass another RV or commercial truck coming the other way.  Columbia, California, is just west of Sonora, and about the same parallel as San Francisco on the coast.  Our RV park is called the Marble Quarry and they aren't kidding about that. There is a huge chunk of quarried marble lying next to our site. 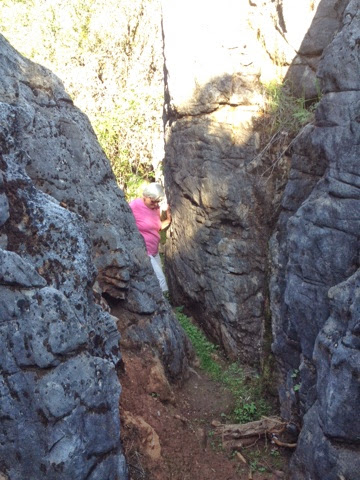 Joan and I used what was left of the waning sunlight to explore a part of the old quarry.  The grey stone that rises above Joan in this picture looks grey but is pure white inside. 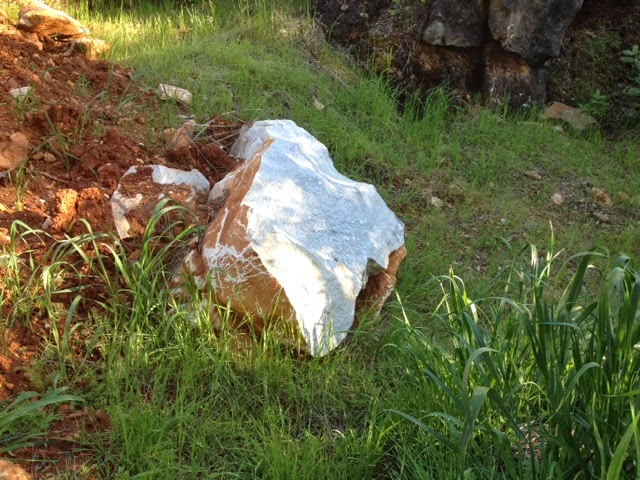 Here is a big chunk of solid marble rock that has been split open- so you can see what I mean.
Joan has developed a real bad case of get home itus, so I'm not sure how much longer she will indulge me on this exploration of the California Gold Country.  Tomorrow may see us bee-line for the freeway, but I hope not... This is beautiful country!
Your Traveling Friends
Jeff and Joan
Posted by Jeff at 6:34 PM