Exploring the Betty Lee Mine

Today is dawning bright and beautiful, and the temperature is predicted to be in the mid 80's.  Friends have been telling us about the historic Betty Lee Mine 12 miles into the Goldwater Gunnery Range.


Joan and I pack a picnic lunch and load up on water.  We can drive most of the way with our Tracker, but the last 1/2 mile is hiking up a bolder strewn canyon.  The heat is tempered by a cooling breeze from the north.
As we exit the pavement and enter the Barry M. Goldwater Range, we call in to range access at the Marine Corps Air Station in Yuma for permission to enter.  We both have valid permits and in a few minutes we are good to go..

My able navigation, and Joan's expert off highway driving gets us to the trail head in no time.  The "parking area" here is surrounded by stack stone walls, some with plank and sod roofs- worker housing and dynamite storage we are told.
We decide to sit in the shade of a Palo Verde tree and have our lunch before heading up the gorge to the mine.

The trail starts out easily enough following the dry arroyo deeper into the canyon...


As we continued up the trail the canyon walls started to close in and the trail becomes more challenging.
Okay, in truth I got a little off the main trail.  I found a better track up on the cliff wall to the right, and it is just a bit easier.
Notice the steel pipe in the stream bed.  It looks like the miners ran a plumbing line from the mine to the cabins below.  That's a lot of pipe!

Back in the day, the boulders in this canyon had to have made this a real challenge for getting supplies in and ore out.  These miners were a tough lot.  According to the Arizona Dept. of Mines , this claim, was owned by Glen Copple and Gust Svensson.  They managed to find a pay grade ore seam that runs across the canyon and deep into the ground.  The mine is, and always has been, on government owned property, but in 1910 when the discovery was made it was not a gunnery range.


When we re-gained the trail on the canyon wall we walked into a wide area where there was either a wood yard or an older wood frame building.  My vote is a former building, but it was very hard to tell.  Masonry and rock are the only building materials that can withstand the withering Arizona sun.

We knew we were getting close to the actual mine, when we came across this giant flywheel in the trail.

I cannot imagine hauling this cast iron wheel up the trail we have just negotiated.  A short way ahead is another just like it.  The cast iron spokes have been broken out of the wheels, but I've seen many of these on the old impulse engines that powered mines of this era.

The path we are walking on gets ravaged by floods that regularly scour these canyons.  The trail most likely looked much different than it was back when the mine was in operation. I would guess that, boulders have tumbled down from above and rushing water has re-arranged everything.


Around the next corner in the trail we are greeted by an enormous tailing pile, wood timbers and steel rails.  I can't wait to explore!  Note the stone wall in the picture above and to the right of the tailing pile.  I later found out that was created for the powered hoist that lifted the workers and the ore out of the mine below.


A set of iron rails still runs from the opening of the mine out to the the tailing pile we had just climbed up.  Records show the mine was in operation from 1927 to 1937.  During that period they really did work.  Diagrams of the mine I found on-line show that this seemingly tiny mine is in fact 700 feet deep with about 6 working levels!  The narrow cut you see above (right side) is the width of the quartz seam that the miners were working.  Removing the quartz left smooth walls on either side, and where clearance was adequate, the approximately 3-4 foot width became the tunnel width. (observed, and also in the mine reports on-line)

As you can no doubt imagine, mining is hard work.  Assays vary but the ore here was roughly  2% copper, with  0.3oz gold per ton and 1.4 oz of silver per ton.  Records show that in all, about 500 tons of material was shipped.  Pretty amazing.

The desert is a fabulous place for storing machinery.  The levers and drum on this winch still operate!  The impulse engine has been partially disassembled, but otherwise The winch with a new cable, and flywheels would still be useful.

Across the arroyo from the main shaft was another tunnel (adit). 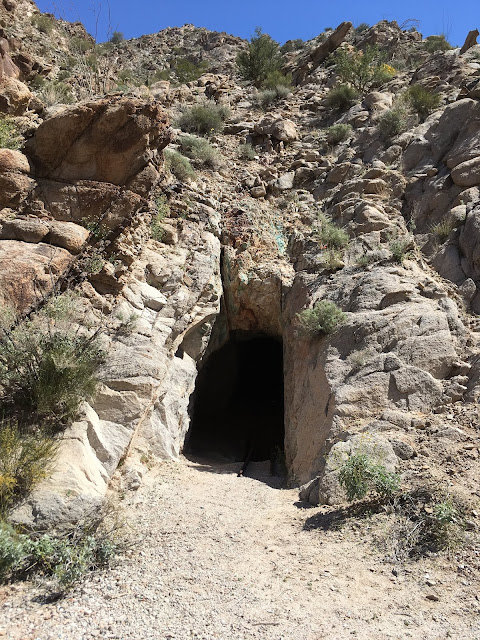 This adit is about 8 feet tall, and the full width of the quartz seam or about 4 feet wide.  I learned later that this adit is almost 200 feet long, but its main feature for me, is just inside the opening.


Just inside the entrance, is a vertical shaft taking up half of the floor.  I dropped a small rock down the shaft and counted to five before I heard it hit something.  Later I found out  shaft that goes down 120 feet!  I have almost no mining experience, but I figured this must be an air shaft for the levels below.

Here is a portion of a diagram I found at Arizona Department of Mines, showing the underground portions of the Betty Lee.

In 1942 when the Department of Defense "withdrew" these lands to put together the Goldwater Gunnery Range.  At that time there was no recorded activity at this mine, so the government hired an assessor to determine if the mine was economically viable.  The outcome was "yes" which meant that the Department of Defense (DoD) had to pay a fee to the owners for baring them access to the mine from 1942 to 1978, when a new assay found that the mine would no longer meet that test.  The claim was revoked.

Joan and I thoroughly enjoyed our afternoon of adventure!  Time to head back home and relax on the patio in the shade.

Email ThisBlogThis!Share to TwitterShare to FacebookShare to Pinterest
Labels: AZ, Betty Lee Mine, Betty Lee Mine near Tacna, Mines in the BMGR-West, Mines on the Goldwater Gunnery Range

Tacna, Arizona
Rolling stones that we are, we have been looking forward to seeing another part of the desert in this corner of Arizona.  We planned this season to move from Ajo to Tacna, AZ on the first of March.  We have reservations at Copper Mountain RV park in the big city of Tacna.

The move puts us in position to see another part of the gunnery range.  The range is divided into East and West.  The East side near Ajo is run by Luke Air Force Base, while the West side near Yuma is run by Marine Corps Air Station Yuma.

My friend and fellow aircraft archaeologist Mark and I have some leads on several air crashes in this area.


Copper Mountain RV Park is about 40 miles east of Yuma along Interstate 8.  It has very large spaces, paved interior roads and concrete patios.  It's also very affordable at about $250/ mo.  It is also very conveniently located for access to the Barry M Goldwater Gunnery range- less than a mile down the road.
The town of Tacna is home to about 602 full time residents and a thousand winter snowbirds.

Tacna's commercial center consists of two restaurants, a tiny grocery store, a Chevron station and a US Post Office.  The Motel is closed.
The town of Wellton about 12 miles west of here is quite a bit bigger at a little over 3,000 full time residents and it has a more robust commercial complement.
The big shopping mecca however is Yuma, AZ which is 40 miles west, and home to more than 93,000 full time residents and an additional 85,000 winter residents.

Our first trip out into the desert, Mark and I were searching for the wreckage of an F-14 Tomcat, and although we had the wrong coordinates, we got some help from another adventurer and found this-


We were flabbergasted!  The whole plane is still here on the desert floor!  It crashed and burned, after the pilot and RIO ejected safely.  We took lots of photos and peered through the wreckage.  This is the fighter jet made famous in the movie Top Gun


A couple days later we were given the coordinates to find this F-4, which literally had a road right up to it.  Again the whole plane was there, minus the canopy and ejection seat.  We haven't found out the story behind this one yet but the amazing thing here is that the whole crash site is just what you see in the photo.  Normally there would be pieces small and large across an acre or more.

The site of this Harrier jet was more typical, spread out over a two acre site.  The Harrier site is a mile hike in from the nearest road, and it must have exploded on impact.  We started  seeing small parts a quarter mile from the main scene.

Also placed out here on the desert are quite a few battle tanks and other pieces of armor.  This is every boys mans dream, to be able to crawl all over a real battle tank.
The hatches are open, so I clamber, not so gracefully, down through the tank commanders hatch.  I am now looking at the working end of the giant cannon.  Below the breach, I can see down into the drivers cramped cockpit.  A crew of five worked in here?  It seems impossible.

Now can I get out of here and back on the ground without hurting myself?

I can't find out anything about this mobile gun carriage fitted with a pair of anti- aircraft guns.  You can crawl up and sit in the open top turret, some units have working elevating cranks and the guns still move through their vertical arc.  Ah! desert air.  Things are preserved so nicely.

Out here one never wants to assume that any piece of ordinance found has been fully spent.  Give it a wide berth and live to hike another day.

There are a few other un-friendlies out here also.  Best to watch your step.  Luckily this one was right out in the open, allowing me to snap a photo and boogie on outta there.  In 6 years of hiking on the Goldwater range this is my first.

Another first was this little guy shown to in the photo on the right.  I lifted a piece of fiberglass to find this critter looking up at me.  I was rather startled, but managed to gain my composure and snap this photo before it scampered away.  I was surprise by the fact that it was almost translucent in color and that it was so big!  The scorpion was about 2-1/2 inches long.

I have always known that both of these natives were out here, I'd just become a little complacent, because I hadn't seen either one.

Stay tuned as Joan and I take a drive/ hike out to the Betty Lee Mine, in the Copper Mountains on the Goldwater Range.