Our Trip today will take us over BLM roads south of town and into the Organ Pipe Cactus National Monument some 20 miles south.  We are planning to visit the former ranch of Henry Gray whose family ranched in this area from the 1920s up to Henry's death in 1976.

The road to the ranch is at the start of the EL Camino Del Diablo or the Devil's Highway.  The road  continues from the ranch here on west to Yuma.  The road was created along footpaths used by the Native Americans in this area in the 16th century.  The Spanish Conquistadors used and improved this to a wagon road,  and later in the 1840s prospectors used the road to go overland to the gold fields in California.  The rough conditions, extreme heat and cold, and the lack of drinking water made this "highway" a deadly prospect for the unweary, and it earned the name Devils Highway.


This portion of the road is heavily traveled by Border Patrol agents and the washboard surface can jar your teeth.  No matter, that's just the way it is out here- there is little-to-no road maintenance.  For us in Mark's trusty Samurai this portion of the highway is a piece of cake.

You turn off the main road into a fenced parking area that is obviously not original to the ranch, and probably installed by the National Monument staff.  Obvious because it is built of pine log posts and rails- none of those in this area.
One of the first things that grabs my attention is that there are three wells with wind pumps on them around the ranch house. 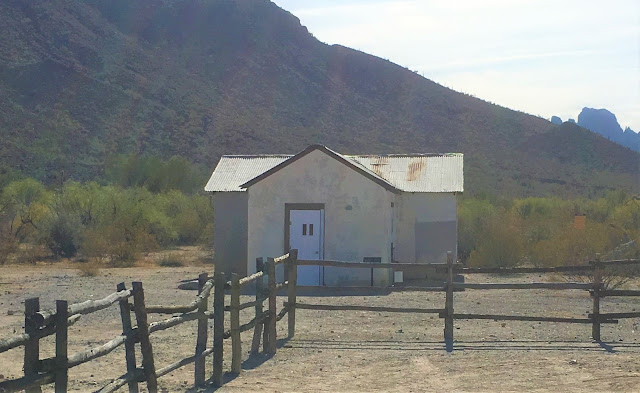 This unassuming little house was the main ranch house for the property.  Stucco walls and corrugated metal roof.


The house is fairly intact- the best I've seen at any of the ranches that I have visited.  The Monument staff has taken out the glass windows and replaced them with heavy wire screens to ward off the inevitable rock throwers, but still allow light and ventilation.  The floor is concrete slab with vinyl asbestos tiles many of which are missing or loose.  The walls, where they are covered, are sheathed with 1/8 inch 4x8 sheets of masonite as here in the kitchen, or wide flat boards and wall paper as in the rest of the house. The ceiling covering has been removed, again probably a nod to keeping the rats and mice from nesting.


There are several other cabins and outbuildings in this immediate area- more in line with what you'd expect at a working cattle ranch.  It looked like at least three other hands lived on the main ranch here in one-room cabins.  The main house was wired with electrical lights, but it was the only one, and it was not apparent where they may have generated the power for them.


This group of buildings was close to a corral (and water pump) and one of the out buildings looked like it was set up for tack and feed.

My guess is that most of the buildings were originally finished with corrugated metal siding and roofs.  The roofs of these buildings are still mostly intact, but on many of the outbuildings the wall coverings had been "appropriated"  for other uses, leaving a light an breezy look to the insides.


The tack house looked like it had never been clad, and the wood on the exterior has weathered to this rich red- brown hue.

There were pieces of corrugated metal sheathing lying here and there, all over the ranch, most likely caught by the wind and separated from its attachments, gently flown to a new resting place.  I haven't shown pictures any of the collapsed structures, of which there are many.  Any of those could have been the donor of this brightly colored sheet of steel.

One thing I remember from my childhood days in Montana, any structure left unused by man will soon become inhabited by pack rats, and that is so true here.  Many of the open buildings had twig mounds indicative of a pack rat nest.

Mark and I spent the better part of an hour roaming the grounds- never saw another person the whole time.  Although we did see several Border Patrol trucks thunder past on the road during this time

We saw a pipeline running from well #1 out into the shrubs and trees an decided to follow it to see where it goes.  We were astounded!  It goes for hundreds of feet to the south.  Starts out in 2-1/2" iron pipe and transitions down to 1-1/2 about 500 feet from the well, and continues another 500 feet to a corral and a huge concrete stock tank.

We were quite impressed with the water works!

By special agreement when the National Monument was created in 1937 by President Roosevelt, the Gray family was allowed to continue ranching and running a herd on the monument until the last of the then living Grays, lived.  When the youngest son Henry died in 1976 the cattle were barred from the monument and the homestead was incorporated into the wilderness.  It was an unusual arrangement and many still question the wisdom of letting cattle run wild in this fragile part of the desert for nearly 4 decades after the creation of the monument.

I am very surprised that the Monument staff chose to preserve this site rather than obliterate it as the staff of the neighboring Cabeza Prietta Wildlife Refuge has chosen to do with the many sites under their jurisdiction.

It is fun to allow yourself to step back in time and imagine how it must have been back in the early 1900s to have been living out here, most of a days ride on horseback, from the nearest town.  Punching cows all day long, and maybe, if you're real lucky, a cool beer soaking at the bottom of the cattle trough, when you get back to the ranch.

Time for us to make the grueling  (easy) hours drive back to town!  😏


My friend, and hiking buddy, Mark asked if there were any places I'd been wanting to see, so I asked him if we could take couple trips- One out to "Marble Mountain" (not sure that's its real name), and a trip to Bates Well on the El Camino del Diablo highway.

Marble Mountain got its name from the millions of small stone marbles that ring its base.  The trip out from Ajo is only about 20 miles, but it is a rough and tumble road so the trip takes about an hour and a half. 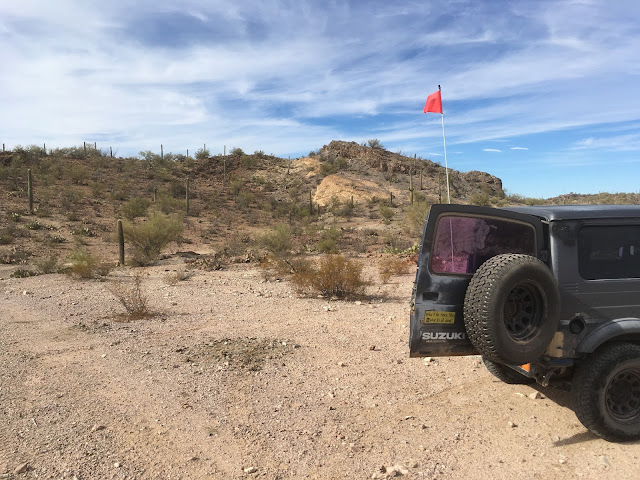 The hill in the background of the photo above is the "Marble Mountain"   I couldn't wait to see if the stories were true. 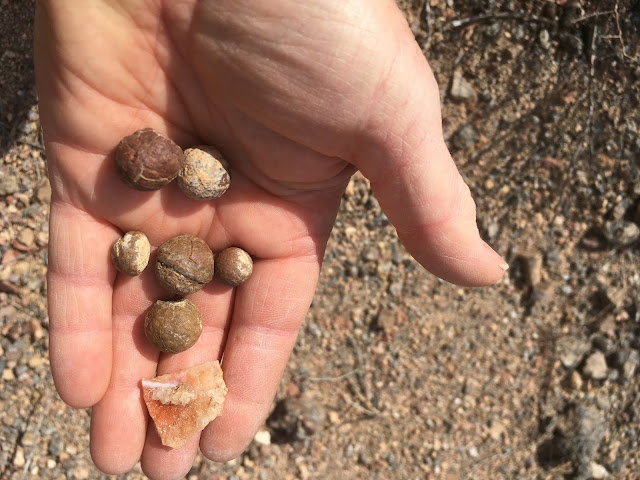 One scoop with my hand and I came up with these specimens.  In just a few minutes I had a handful!  Oh- that's a flake of apricot colored quartz there too. 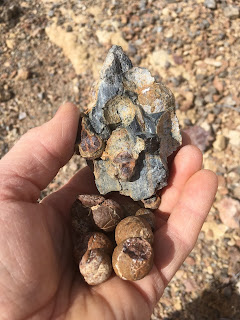 I spent half an hour wandering up and down the slopes looking at the ground and delighting at the variety of  small round orbs.  I found what looked like clumps of marbles embedded in stone- like a bullet mold poured with rock.  There are several theories about how these formed and the most reasonable theory I've read, is that the sedimentary rock formed in the empty bubble voids formed in volcanic magma.

I wanted to fill my pockets with marbles and fragments of rock with marbles in them- but reason descended over my enthusiasm.  What would I do with them?  I don't need this type of souvenir- especially living in a motorhome.  Leave them here for others to find and delight in them as I did.


When Joan and I first arrived back in town we were surprised and pleased to see that the murals in Artist's Alley had overflowed out on to the walls of several adjacent buildings. 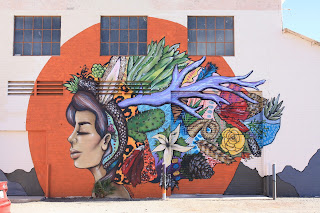 Early one morning I slung my camera over my shoulder and headed down town to snap some pictures of the new additions. 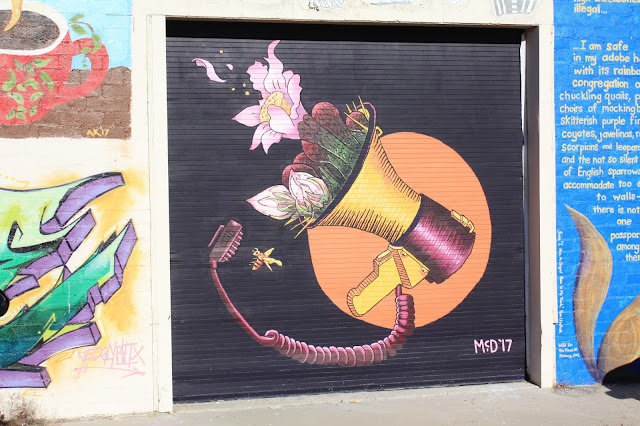 All the art is beautifully done, but I confess, I don't always understand the message. 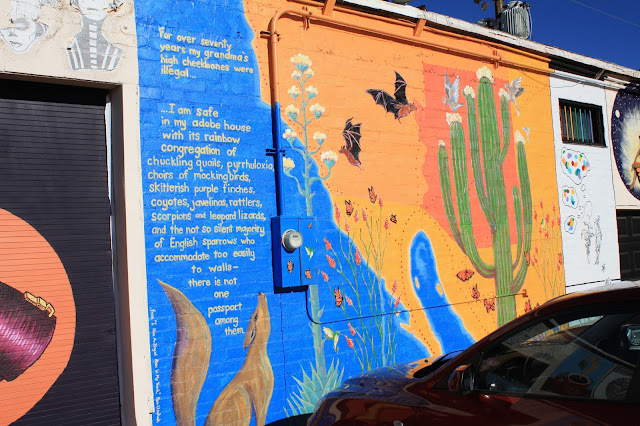 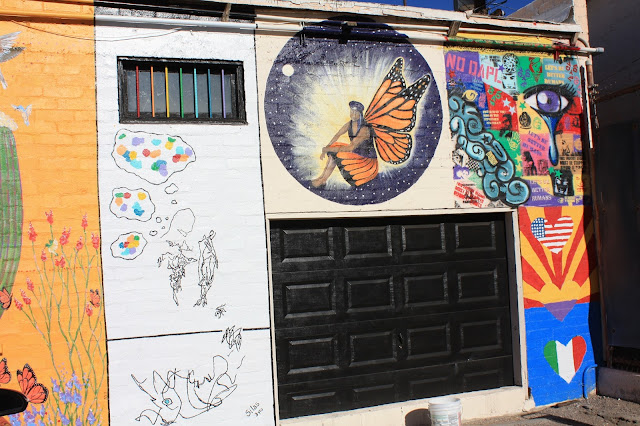 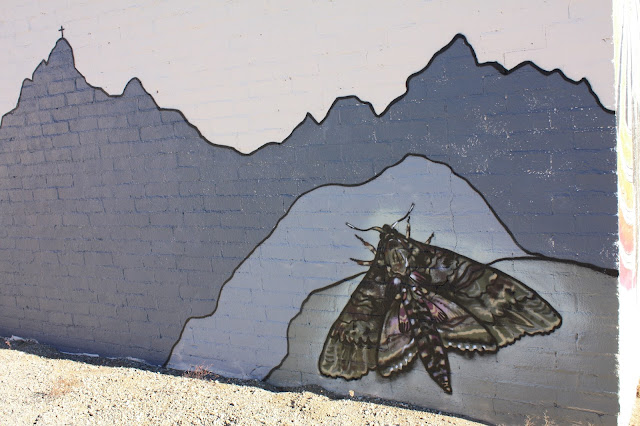 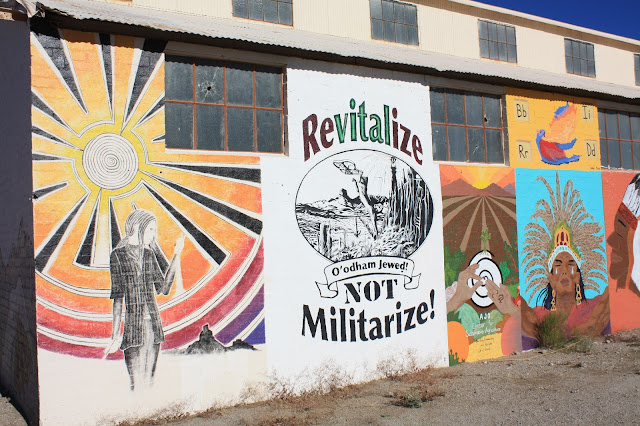 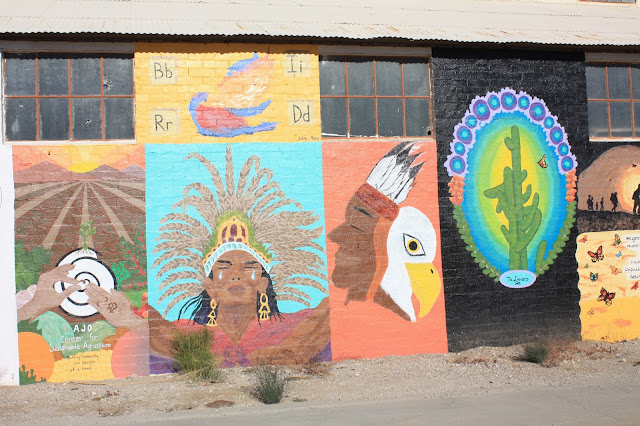 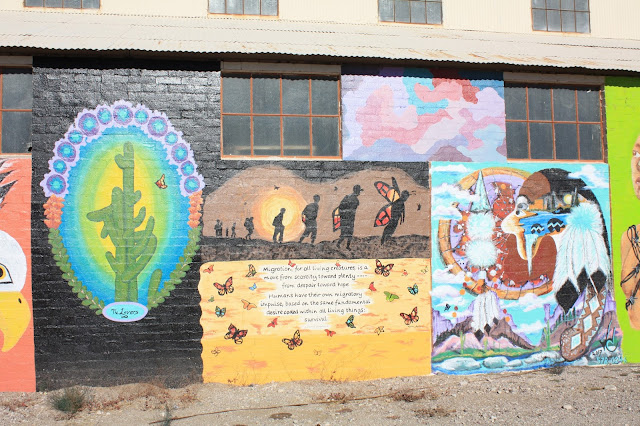 Hope you enjoyed it!
In my next post I'll show you what we found on our trip to Bates Well.