Our current Rotary project is to build 3 vendor booths for the up-coming BiMart Country Music Festival at Cape Blanco. 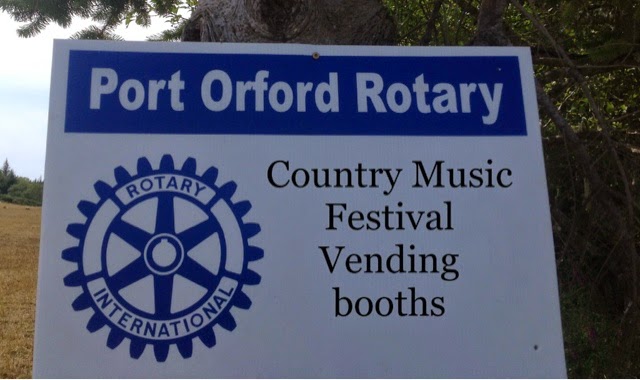 We are able to build the booths close to the site of the Festival because one of our fellow Rotarians is the owner of the ranch where the Festival is being held. 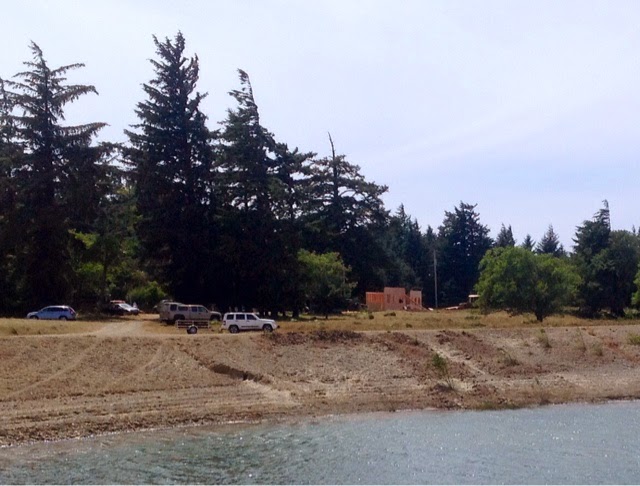 We are at the McKenzie sheep ranch on Cape Blanco.  Three Rotary clubs have joined forces to build these 10x20 foot buildings.  We have Rotarians from Brookings and Gold Beach partnering with the Port Orford club. Two of the booths are for other vendors, who are contributing materials for all three.  The Port Orford Rotary has access to a portable sawmill, and the three Rotaries milled most of the framing materials.  (See my blog post 6/15/2014).  The sheathing plywood, roofing, electrical, plumbing and such will all be donated material from the other two vendors. 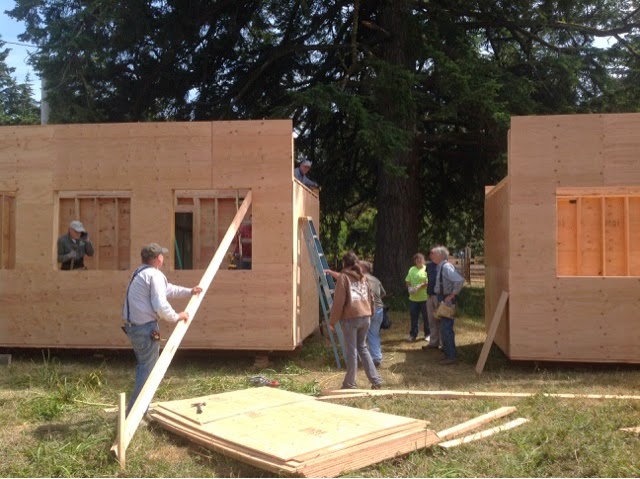 Yours truly in the window to the left (on the phone) supervising the eager crews.

My brother Nick came down from Salem for a visit on Friday the 20th.  Nick rode down after work on his 850 Honda Pacific Coast motorcycle (apt name eh?).  We hung out at home and caught up with what is happening in our lives since we last saw each other in November last year.  We took a long walk through town just before dusk and talked at home until nearly 11PM.

Saturday June 21st
Jeff's Birthday.  Nick was generous enough to come with me on Saturday and help build the food booths.  Nick's construction experience got him assigned to do all the layout work, and the crews were highly appreciative.  I have really fallen out of the habit of getting good blog photos.  After Nick left on Sunday I realized I didn't get out the camera even once.
Saturday night, Joan took Nick and me out to dinner at Griff's- I had their crab pasta, and it was delicious.  We finished up with coffee and pie- excellent!

Wednesday and Thursday were rainy, so I got a rest break from what has been a marathon of work days.  Wednesday Joan and I drove up to Bandon for Joan's prescription meds, and groceries from the Price n Pride grocery store which has a better selection of vegan foods than our local Ray's Market.

Thursday June 26th
John and Dawn Pierce, two of Joan's former co-workers were in town and came to the house to see us.  Jeff had to leave for Rotary lunch, so we suggested going to dinner together and continuing the conversation.  To our surprise, we found out that it was John's birthday, and they ascented to sharing their celebration dinner with us.  We met them at the Port n Starboard restaurant, ate some good food, drank a bottle of Pinot Gris, and had a wonderful time.  After dinner we were invited over to the house that John and Dawn were renting on 13th Street, on the edge of Garrison Lake.  John and Dawn are shopping for a house to buy, here in Port Orford, and are looking at a lot of the properties we had considered when we were looking, so it was fun to compare notes.  We talked until 10 PM and considering that we have to pack up the motorhome and head for Grants Pass tomorrow morning, we excused ourselves and headed home and to bed.  We promised our good friends Jim and Sara McNeil that we would help out at the wedding of their youngest son Chris.  The wedding is at Jim and Sara's house near Merlin. (more on the wedding in the last post) 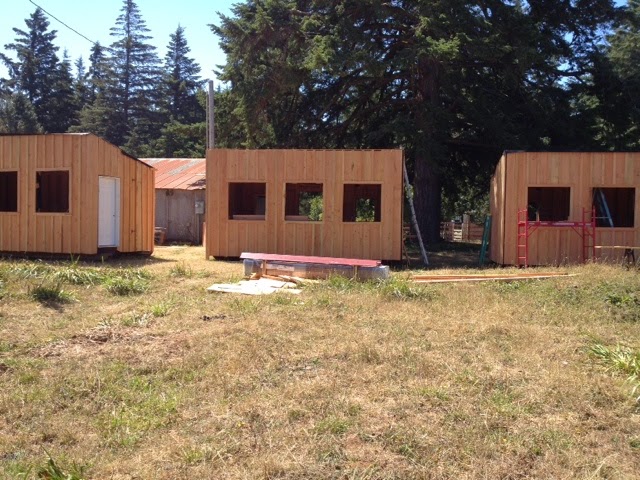 July 8th
Jeff's been working nearly everyday on the three booths.  Doesn't sound like it would be that hard, but we are volunteers and we still have metal roofs, electrical wiring, interior plywood paneling, countertops and shelves, vinyl floors, doors, porch and stairs, caulking and paint.... 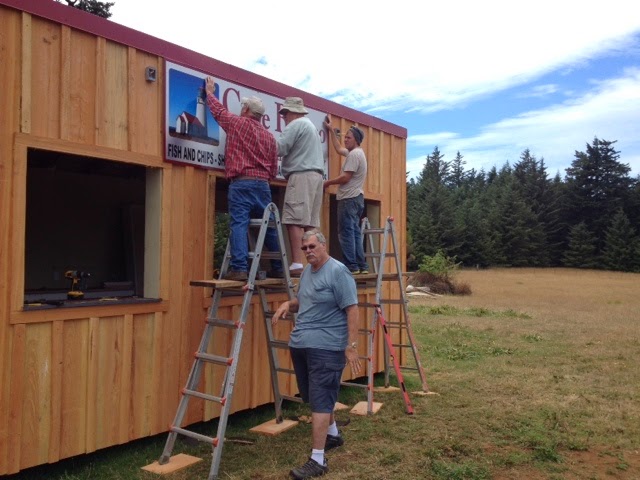 Our crew- hard at work 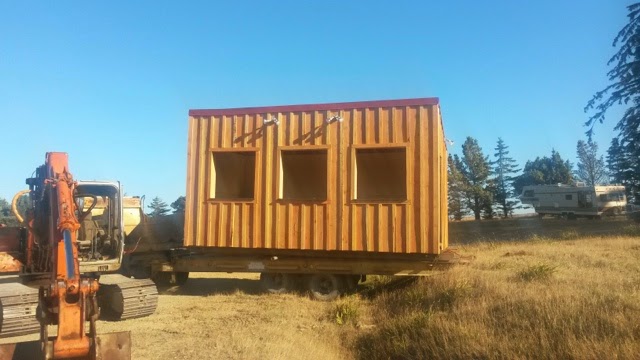 July 26th-
Finally ready (well almost) for transport to the site.  The Festival wanted our booths set starting at 7AM today.  We had to load them on a tilt bed trailer and road them the 1/8 mile to the Festival site.  Still have doors to set and landing and steps to build.
By late afternoon, we were told by the Festival organizers we could not work on the booth again until Wednesday.  That means finishing up last minute items on all 3 booths AND getting them stocked and ready to serve food  Wed-Thursday.  Festival opens on Friday. 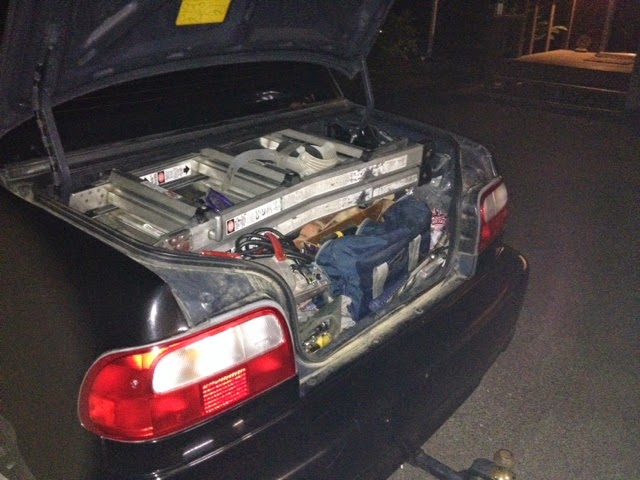 Here's a picture of Jeff's "work truck".  Our X-90 Suzuki has a fairly large trunk and I took advantage of it's capacity to haul all my tools, including a 12' folding ladder. 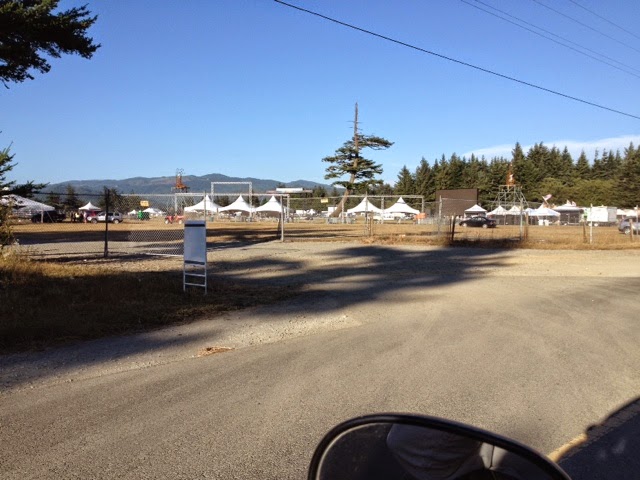 Wednesday July 30th
The Festival grounds set-up crew is still hard at work,  and the vendors get today to get their areas set-up up.   The Rotary booth still needs a working back door, shelving, soda machines, miscellaneous trim and caulking.  I'm so ready to be finished with this build.
Thursday July 31
The Festival is here!   Lots of people began arriving today in RVs and with tents.  The vendors are ready to roll.  Tomorrow the burgers begin flying out of the Rotary Booth and the dollars in.  I work two shifts Friday and one Sunday so this will be a busy weekend.  Then some well deserved rest will be taking place.
Your Traveling Friends
Jeff and Joan
Posted by Jeff at 9:54 PM No comments:

Friday June 27th
It rained over night!  We woke to swirling winds and rain lashing the windows.  Luckily by the time we had eaten breakfast, the wind and rain had died down a lot and we were able to load up the motorhome with  the clothes and food we'd need, without getting soaked.  We departed at 11:30AM and headed north in a light drizzle.  By the time we got to Bandon the skies were clearing.  As we got closer to I-5 the weather got better and better.  When we arrived in Hugo, at the Joe Creek Waterfalls RV Park, the sun was out and it was 76 degrees. 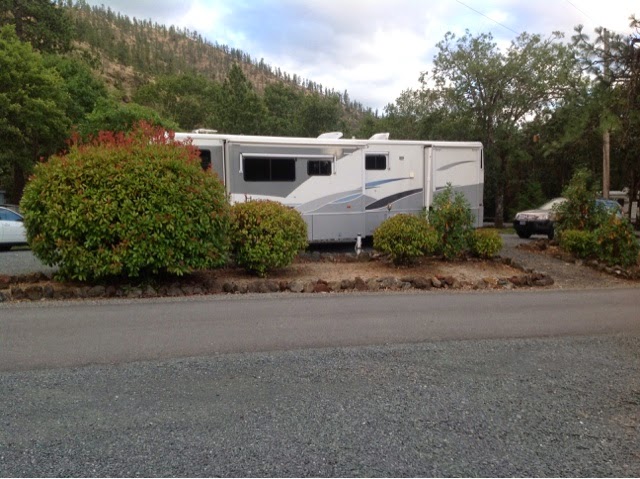 Sat 28th
We were here to assist our good friends Jim and Sara McNeil to set up for their son Chris' wedding. Chris has been working and living in San Antonio, Texas for the last several years.  While there he met and proposed to Lianna Flores.  Both Chris and Lianna like the setting of Jim and Sara's house which is in the Hugo area, north of Grants Pass.  So for the last year, Jim and Sara have been readying for a large out-door wedding on their front lawn 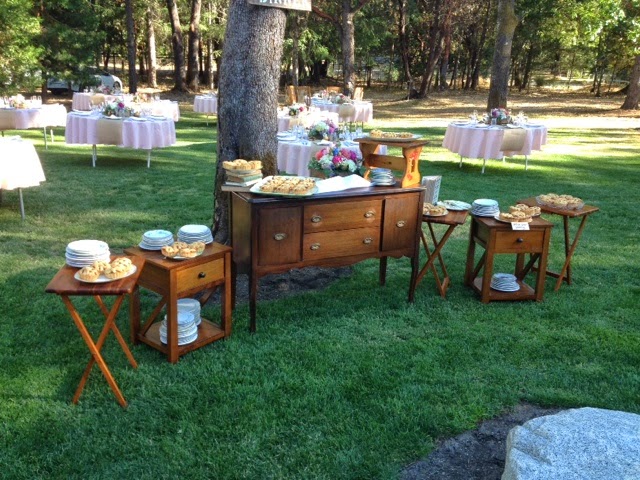 Joan and I are here to be the 'working staff' for the wedding preparations.  anything that needs to be done, we are game to do it. 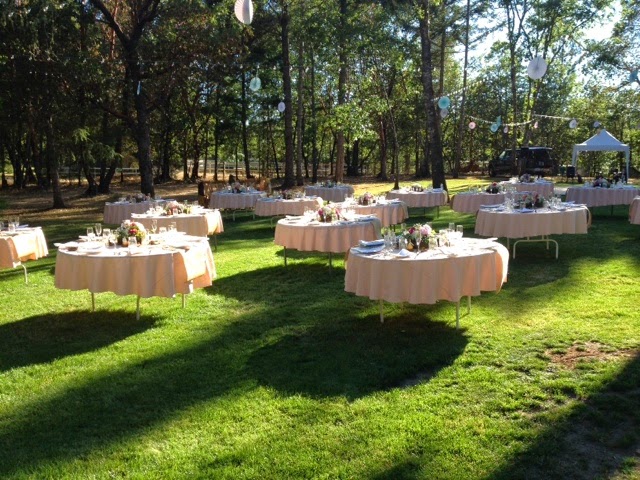 The ceremony is at 6 PM, followed by dinner and dancing, and drinking.  By 4:30- all is ready, so Joan and I sneak off to shower and change clothes. 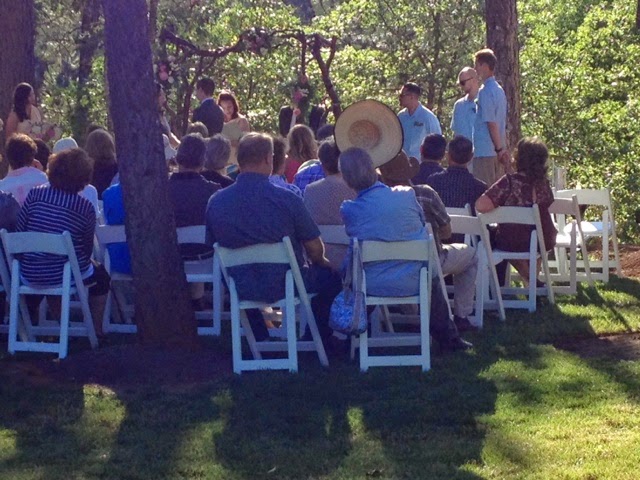 The weather cooperated, and the ceremony was picture-perfect. 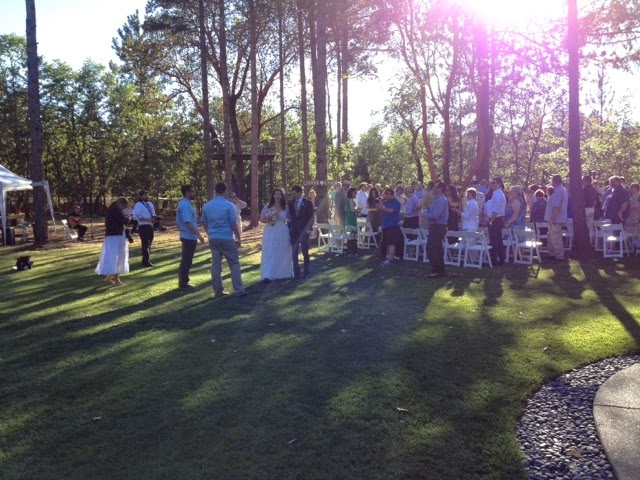 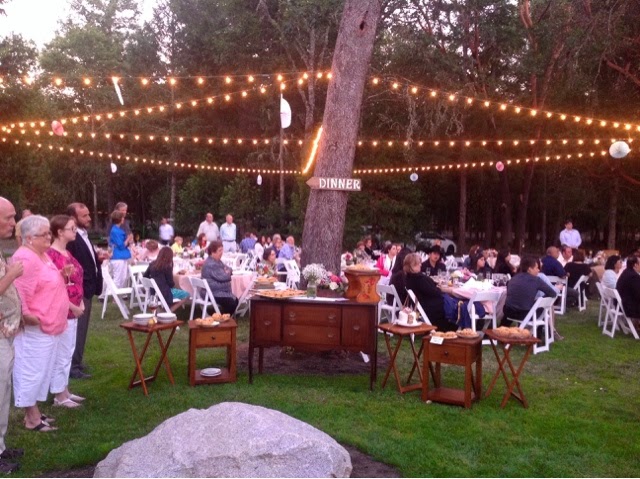 The catered dinner was excellent 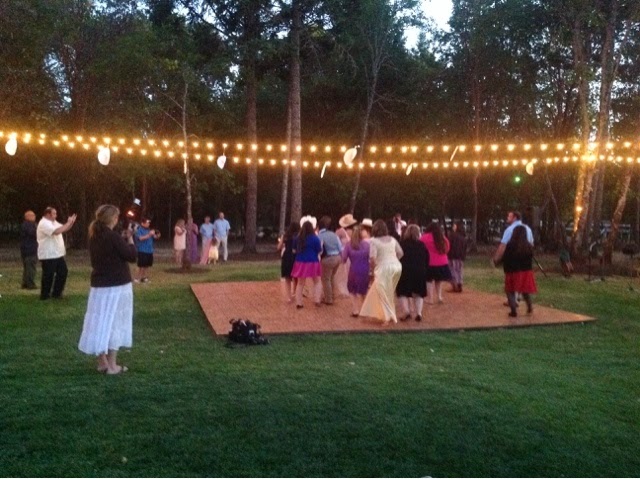 And the revelers danced into the wee-hours of the night 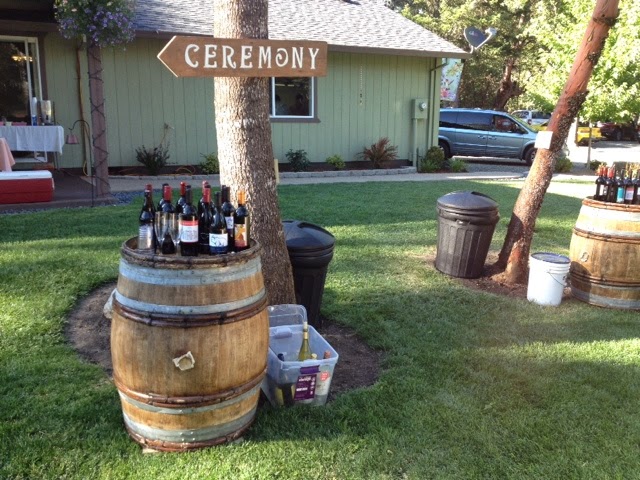 We scooted off to our bed by 11PM, up bright and early for the clean-up tomorrow.
Great fun!
The take-down and clean-up went very quickly and Joan and I were off to Costco for our binge shopping by a little after noon.
Monday we checked out of Joe Creek Waterfall RV Park, and cruised on back to our home port in Port Orford.