One makes many friends in an RV park- you just can't help it.  We met Gary and Pat from Redmond, Oregon, and today they invited us to take a picnic lunch and go sight seeing with them.  They have a crew cab Chevy truck that is as comfortable as a limousine so we said yes!

The round trip was about 150 miles so we were packed up and ready to go at 9:30.  None of us had been to Agua Caliente before so we plugged it into the GPS, and it's a good thing we did, because there is so little left of the resort that unless you knew what to look for you might miss it.

Agua Caliente went through a sort of identity crisis in the mid to late 1800s.   In 1858 it was known as the Flap Jack Ranch and was established as a stage stop for the Butterfield Overland Mail. (more on that later).  By1862, four years later, it was listed as Grinnel's Ranch, while the Union Army called it Stanwix Ranch.

In 1897 King S. Woolsey built the 22 room resort that is shown here, and it became a popular spot for folks to visit and soak in the resorts very large pool filled from a local hot springs.  US Highway 80 came through in the early 1900s and tourism boomed.
As with many ghost towns in the West, a highway re-alignment bypassed the resort, and finally in 1960, Interstate 8 took travelers 30 miles south of town.


The road today bisects the old resort and runs up next to the front porch.  Back in the day there was a large unpaved parking lot in front of the resort.  The largest of the hot water pools (shown to the right side above) was on the far side of the parking lot.   Today the pool is behind a wire fence prominently posted with no trespassing signs- so the photo above gives you a sense of scale but not much more.  The pool is huge at nearly 200 feet long and 70 feet wide (61m x 21m)

Historic images of the resort, like the picture above, show a parking area directly in front of the front entrance.  The highway was about 350 feet away when this picture was taken.  When the resort closed and was sold, farming acreage was the important factor and the road was moved to expand the fields.  Today there is no more hot water for the pool.  A new well sunk to water crops on the adjacent farm, drained all the water away.  Ah Progress!


We prowled around the hillside above the road and walked through the foundations of what is left of  the town.  There was a general store, and several houses here back in the day.  We wondered if this was the remains of the store.   The masonry shows excellent craftsmanship.  Unfortunately he mortar appears to be a clay mix, and with the roof gone, the walls are slowly loosing their mortar.   Wood being scarce in this area, I am guessing that the buildings were stripped long ago and the wood re-purposed.   Looking around, it's no wonder that stone was the builders choice of material- it's abundant and durable.

One historical note:
Stanwix Station 6 mile SW of Agua Caliente was the site of the westernmost skirmish of the Civil War.  Capt. William P. Calloway leading the California Column toward Tucson had a brief battle with 2nd Lt. John W. Swilling of the CSA.  Swilling had been sent out from Tucson to destroy as much of the Overland Mail Route as he could, burning the buildings and the hay.  One Union private was wounded in the brief exchange and the Confederate forces withdrew to Tucson.

DATELAND, AZ
After having our picnic lunch on the front porch of the Resort building , we decided to cruise on into the tiny town of Dateland and have date flavored milkshakes.  Having already sampled a date flavored shake earlier, I chose a scoop of espresso madness ice cream, which was excellent.  Out in front of the truck stop/ ice cream parlor was this plaque:
It reminded me that Arizona trained more pilots and aircrews for WWII than any other state.  One thing Arizona had for the war effort was open space.  The Barry Goldwater Gunnery Range had over 1.7 million acres of training space during the war years.  This area trained fighter, reconnaissance, helicopter, and bomber pilots and crews, as well as ground troops and wheeled and tracked armor.

On our way back east on the interstate, we took the Citrus Valley Rd exit and headed north and west to Painted Rock Petroglyph Site. 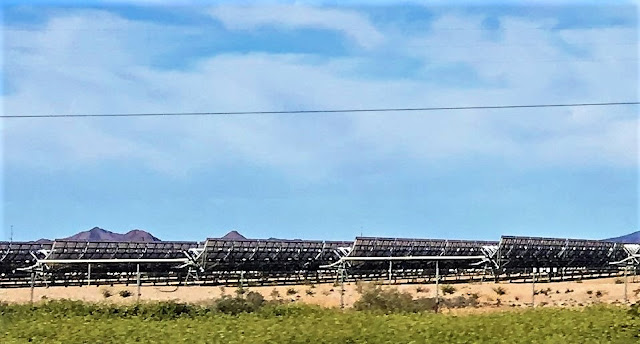 On our way we passed the Solana Generating Station.  Completed in 2013 this is a massive solar site that uses polished parabolic mirrors to focus the suns energy on long pipes containing a liquid salt medium that gives up its heat to a steam turbine that generates over 280 megawatts of electricity.  Enough electricity for 70,000 homes.  When it was built it was the largest of its kind in the world and the first one in the US.

Painted Rock Petroglyph Site used to be an Arizona State Park, but has since been turned over to the BLM for management.  The petroglyphs were all on this smallish pile of rocks, out on otherwise flat desert, all by itself.  I was stunned by the sheer number of rocks that had markings on them.  You can get a sense of the size of this small boulder pile, probably 100 feet (30m) across , 400 feet (122m) long, and 25 feet (7.6m) high .  In this collection there were three eras represented.  The are an estimated 800 individual markings in just this one pile of boulders.   The oldest markings are thought to date back to 350-550 AD, the "ancient ones".  Later markings fall into the period 900-1400 AD and are the ancestors of the native tribes many of which still inhabit this area.  Still later are the markings of the "Modern" era  including  Spanish explorer Juan Bautista de Anza 1775, and much later the Mormon Battalion in 1840, and even General Patton's troops during WWII in 1940s. 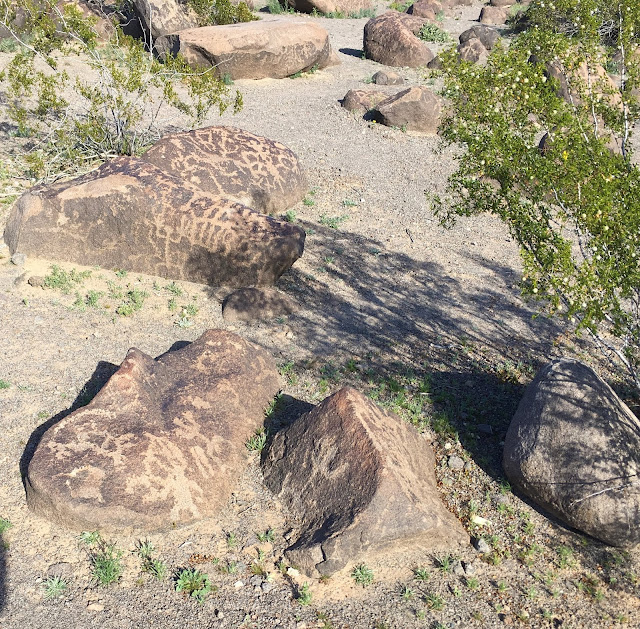 I learned that petroglyphs are made by tapping a small rock against the granite and basalt boulders which chips off a veneer or crust that has formed on the rock.  This veneer is referred to as "desert varnish"  because the conditions for its formation only occur in arid climates.  Pictographs on the other hand, are painted on to a surface using pigments, and that is not what we have here.


While visiting the petroglyph site I found something that I was not expecting.  An interpretive sign pointed out that running alongside the petroglyph site were ruts from the original Butterfield Overland Mail route.  Bear in mind that we drove 14 miles north of Interstate 8 to get here and I-8 is pretty much a straight line to Yuma from Gila Bend.  Why would the stage road go so far north before turning back southwest towards Yuma?

John Butterfield established this road as a mail route back in 1876.  He received one million dollars from the US government to establish twice weekly mail delivery from St. Louis, MO to San Francisco, CA.  But he did so much more.  By establishing a route, 139 rest stations, with food, feed and water, he opened up the west to emigrants!

Butterfield used this route from 1858 until the beginning of the Civil War in 1861.  The stage ran day and night with only 20 minutes for any stop covering 2700 miles in only 25 days- cutting in half the time that it had taken previously.  After the start of the Civil War the stage line moved north to avoid Confederate raiders.   By 1869 the transcontinental railroad had been completed, foreshadowing the end of an era for coast to coast stage lines.
No one on a Butterfield stage coach was ever killed or robbed by Indians or outlaws.

Prospecting in the Desert

We heard a story...
Some friends in the RV park told me that they saw some aluminum and parts near the road out on one of their trips last year.  My ears perked up and I got one of them to point to an area on the map where they thought they had seen it.  My friend Mark and I hunt WWII air crash sites and this was a solid lead.


The yellow trace shows the route we took in from the highway to the yellow circle at the top right.  The green trace show the alternate route we took back, going down to Ryans Wash (arroyo).  The red hatched area is closed most of the time because it is a buffer zone between the active tactical range and the less active Area B.  Area B is called a "maneuvering zone", used to line up on targets in other areas.  As such, the public is usually allowed to hunt, camp, and hike in this area.

The road was rough. It took us 4 hours to get there and 3 hours to get back!  All totaled it was about 55 miles, and we had about 1 hour of exploration at the site- but boy was it worth it!  Doing the math we moved at an average rate of 8 mph.
Once we arrived at the location we were given, we found the site fairly easily.  The debris field was better than we could ever have expected.  Within 30 minutes we had found an elevator assembly, and lots of aluminum skin, some tubing, electrical wire, fragments of titanium turbine blade, etc.  The site had been cleaned up after the crash, the fuselage and engine were gone, but there was plenty to let us know we were at a crash site.

Mark and I were searching for a serial number or a data plate that would allow us to identify the aircraft.  We finally found a part which identified this aircraft as an F84.


Using this information Mark found the crash report that told us more about the incident.  The jet crashed in 1954 while training in the East Tactical Range.  Thankfully the pilot ejected and suffered only slight injuries.
The F84 first flew in 1946, and this G model was introduced in 1951.  The Thunderjet as it was called, was the primary strike aircraft of the Korean war.  Interestingly this aircraft was manufactured as a swept wing also.  Our find is a straight wing.

This was pretty exciting because it is as close as you can get to the active part of the range.  (behind me in this photo).  The Hazard area we were in is the buffer between the bullets and bombs and us civilian explorers.  We can only go here by permission, and only on days the Air Force won't be flying.

Less than a quarter mile from the tactical zone we saw the first of several corrals that dot the Hazard Area out here a torturous 3 hour drive from the highway.   Don't be fooled by the road in the picture above- this is a superhighway compared to the deep washes and boulders that made up most of the trip.  I couldn't imagine getting a cattle truck up here- maybe the roads were improved back 60 years ago.  At first we could not figure out where the water would come from to fill this substantial concrete and stone tank.  Mark and I marveled at the fact that the next 5- 6 miles of "road" had remnants of a 1" poly pipe line buried alongside it.  Holy Cow!   The early ranchers pumped water to stock tanks about 2 miles apart, for the next 6 miles!   The cattle were supposed to have been removed from this area when it was appropriated by the Department of Defense in 1941.  Much of this acreage was already under the Bureau of Land Management- so very few private landowners were affected by the appropriation.  Still, It's amazing to see these structures that have to be more than 75 years old, looking as if it were yesterday.
A good day for this explorer!