Bard is a small area north of Yuma on the California side of the Colorado river where they grow Medjool dates.  Joan and I were interested in seeing the plantations and sampling the thick rich date milkshakes that they make there.

We took Picacho Road  out of Winterhaven which zigged and zagged, changing names each time we turned a 90 degree corner.  We zoomed by this interesting looking place-

I did a double-take and pulled into the parking lot to check it out.  The sign out front just said Cloud Museum, but the equipment staged outside the gate really got my attention. 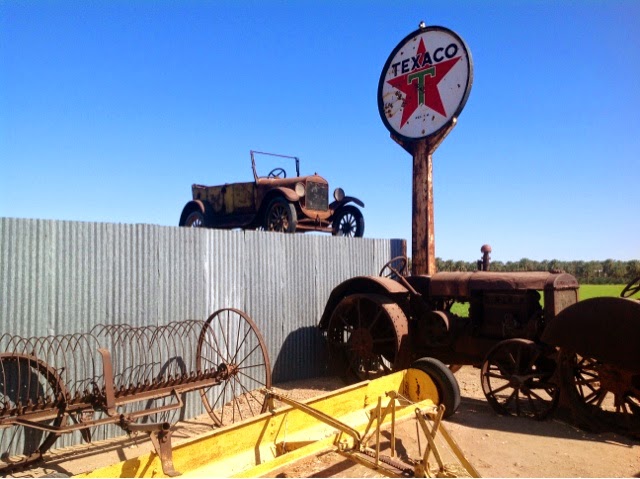 I peered in the open gate and saw a sign that said Cloud Museum admission $5- I quickly realized that there were no clouds- only lots of cars and trucks and other stuff- was hooked. 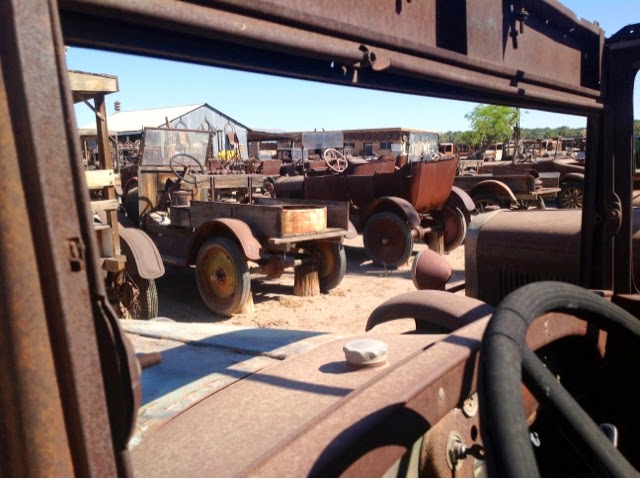 There was an ammo box with a slot to accept your admission -on the honor system it turns out- so I paid up and started looking around.  I saw a staggering number of mostly intact early model As and Ts.  I counted up to 150 cars and trucks before I gave up counting.   Only a few have been fully restored, and they are in a separate garage out of the hot sun. 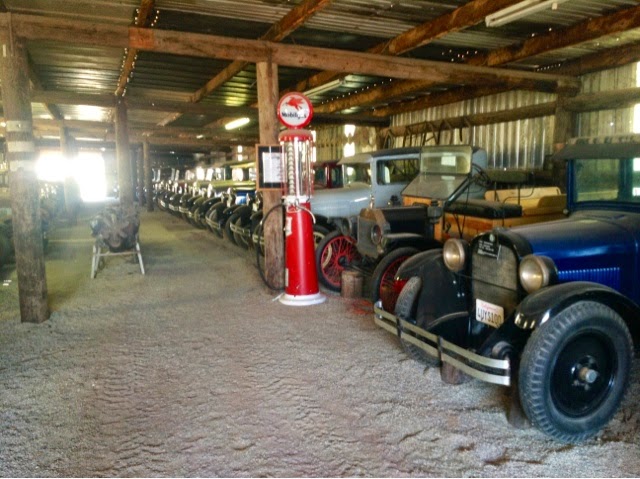 The more I looked, the more interesting it got.  There are collections of cars for sure, but there were also collections of very early washing machines 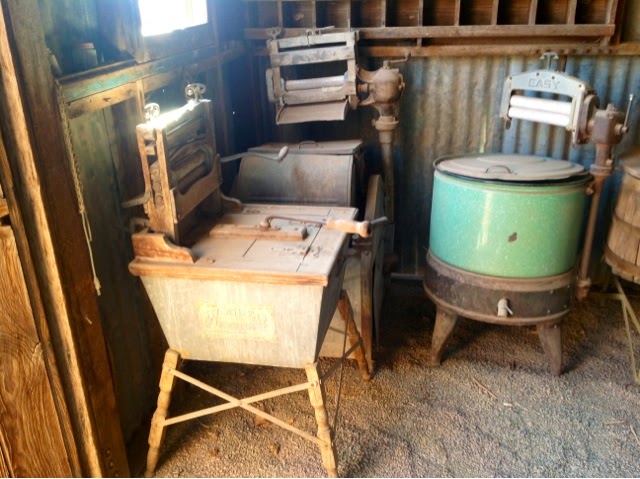 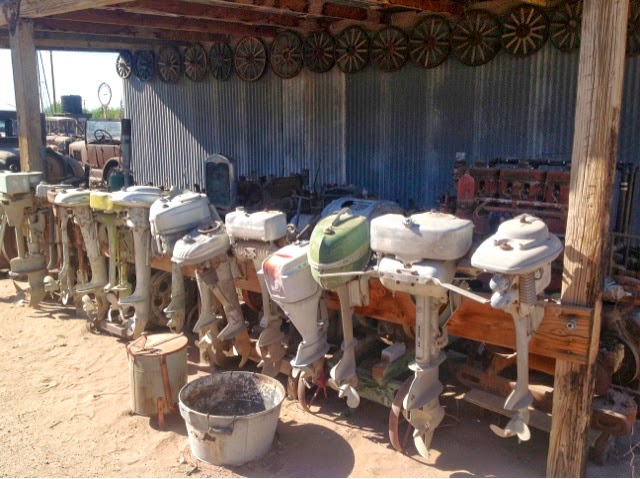 Radiators, lamps, gas pumps, farm implements, hand and machine tools- I could go on, but you get the idea- this place is a museum of the first order- and you can touch everything here! 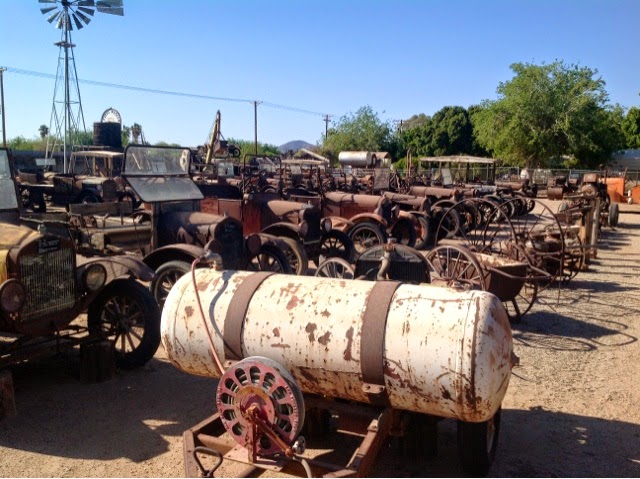 The Cushman Eagle, above,  is similar to the one that my older brother Nick and I rode around Beverly Hills back in the 60's when I came down to LA from Oregon for a visit.
I eventually had to tear myself away- I had been here for the better part of an hour, and Joan had elected to stay in the car out front- I got worried, she'd drive off and leave me if I didn't get back!
Back on the road again, we were getting close to our original objective now- that date shake was going to be a welcome sight on this warm and pleasant day. 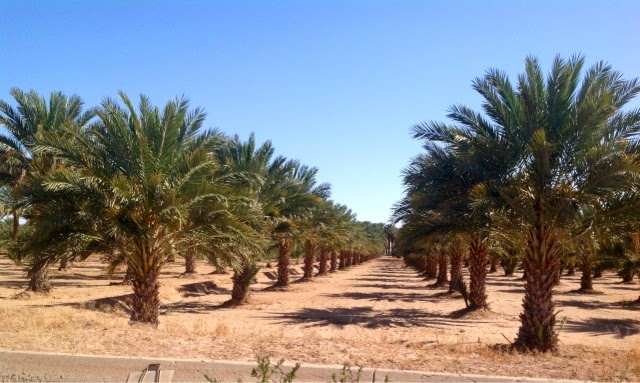 We passed quite a number of palm groves on both sides of the road.  The plantations were interspersed with fields planted with vegetables, grain, and even groves of citrus trees, with oranges and lemons visible. 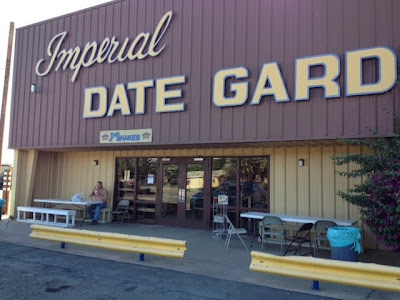 We saw several signs for road-side stands selling fruit- but the sign here above the door at Imperial Date Gardens said SHAKES!  We pulled in here and browsed the many items for sale, including packages of nuts, seeds, dried kiwi, banana, plums, raisins, and of course Medjool dates.  We ended up buying some kiwi, banana chips, and dates, along with a delicious date milkshake.  We got to watch a crew either harvesting or pruning ( we couldn't tell which) the grove of trees surrounding the store.  They use aerial lifts like the ones used by building contractors, to get to the fruit. 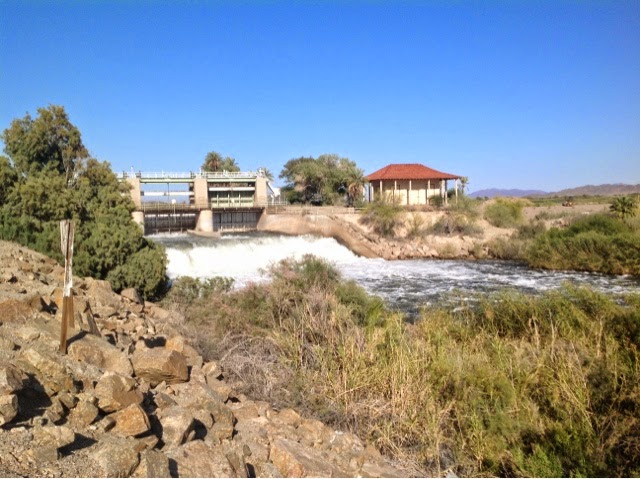 The desert here is nourished by supplies of water coming from canals off the Colorado river.  We have to wonder how long this will last with the droughts that have been covering the West for the last several years.  Lake Mead is lower than we have ever seen it.
We decided to take a different route back to Yuma.  To get to Bard we had traveled north and east from our RV park in Winterhaven, generally following the west bank of the Colorado River.  We decided to head further east on Imperial Dam road and cross back over the Colorado into Arizona, then head south back to Yuma. 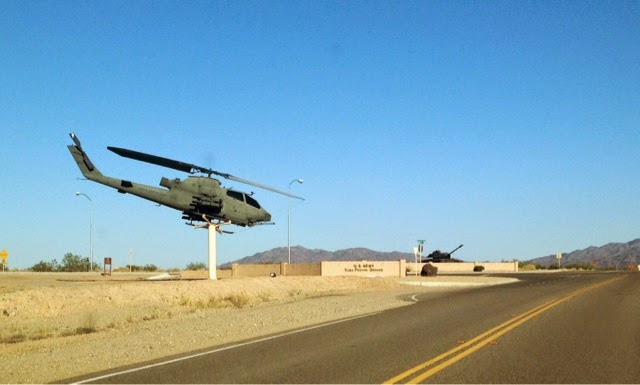 Our return route took us right by the gates to the Yuma Proving Ground, one of the largest military installations in the world, encompassing 1308 square miles of the Sonoran desert.  Most everyone knows about YPG as being a testing facillity for military equipment of all kinds.

On the highway across from the military base was a display of early armor, and self-propelled and towable howitzers.  I just had to take a look!

It never ceases to amaze me what is around the next bend in the road.  This country has an amazing amount of history and beauty for those who are willing to seek it out.