Where Summer Spends the Winter

I am always intrigued when I see "different" building techniques.  The town of Ajo has alleys that run mid-block behind the two rows of houses facing the street, and I actually like walking down the alleys to see a different perspective.  As Joan and I were walking down to the grocery store this week I became interested in the various techniques used to build the outbuildings that occupy many of the back yards. 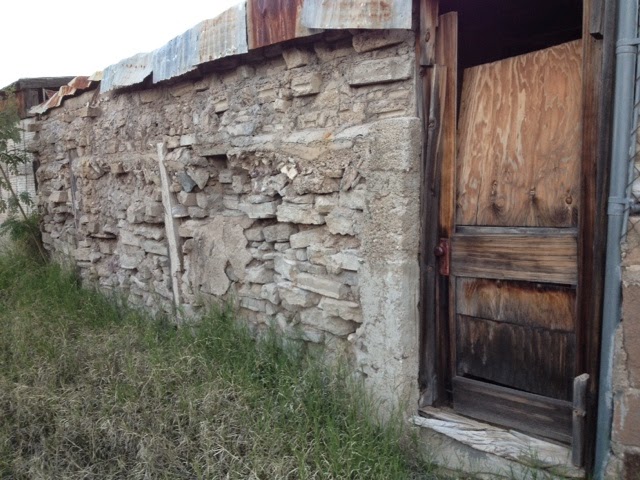 This outbuilding was built right on the edge of the alley, and appeared to have walls made out of alternating layers of rock, broken concrete, and rubble.  I was just guessing, but it looked to me that big rock and concrete bits got more scarce as the wall got taller.   I'm not especially a fan of the transition from roof to wall- but it does lend some character to the building. 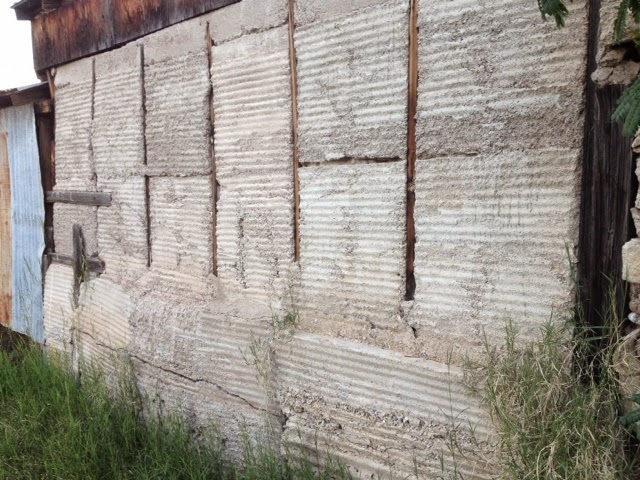 Here is another interesting wall.  I'm not entirely sure, but it looks like they poured concrete into forms made of corrugated metal 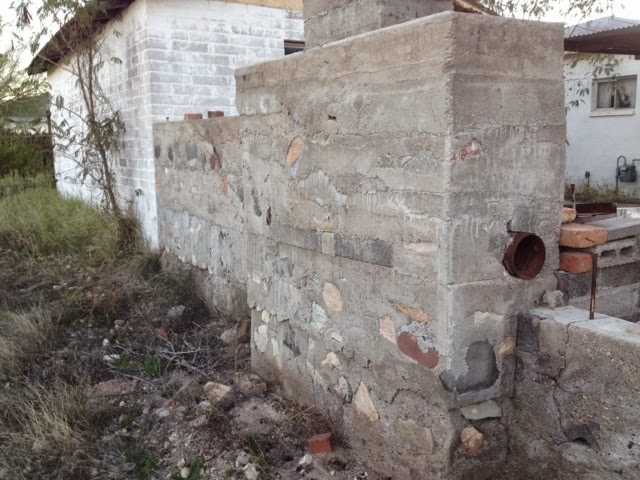 This wall was salted with boulders during the pour, to minimize the amount of concrete that was needed.  Certainly looks massive enough . 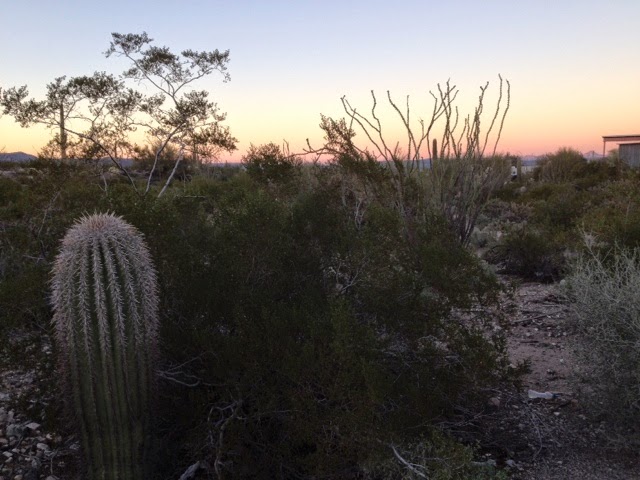 We have had some very warm days this week, actually equalling, or breaking some standing records.  Typical daytime temperatures for February are in the high 50s to 60s, and we have had temperatures in the high 70s to low 80s.  Joan and I both like to get in a walk of a couple of miles or more every day, and the mid-day heat caused us to pospone our walks to later in the afternoon.  We are enjoying the change in the look of the desert, and are seeing lots of beautiful sunsets. 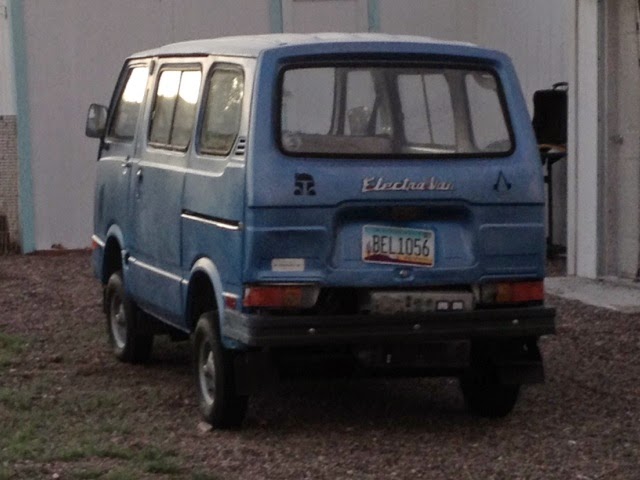 On one of our walks, Jeff spotted this older Subaru van and was surprised by the ElectraVan nameplate on the back.  When we got back home, we Googled it up and found that is a Subaru 600 van that was modified by Jet Industries in Texas during the 70s and 80s, to be sold as an electric vehicle.  If you are interested you can read more about it by clicking the link here My ElectraVan 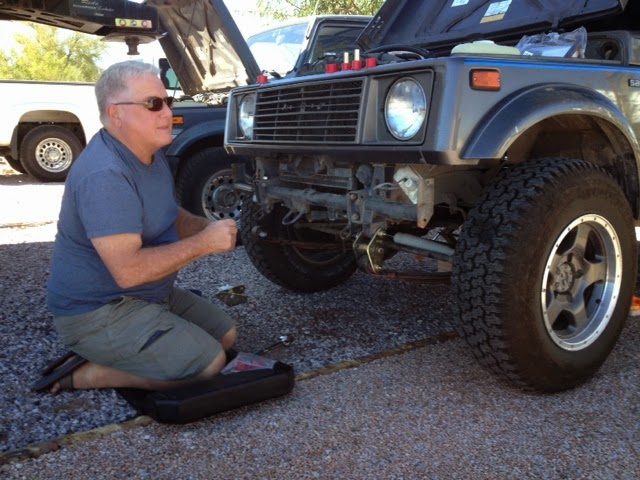 Wednesday Feb 12
The last time Mark and I went exploring in the desert we noticed that the new spring shackles on his '88 Sami were allowing the springs to move sideways too much.  A little investigation, showed  that the bushings were all deformed.  Mark ordered new bushings of a harder material from Low Range Off  Road and we got busy putting them on today.   These new bushings look like they'll do the job- but only a desert trial will tell for sure- so I'll have to let you know.  While we were at it, Mark also decided to put on all new radiator hoses.  Turns out that was a good call- one of the intermediate hard pipes was rusted through and could have failed at any time. 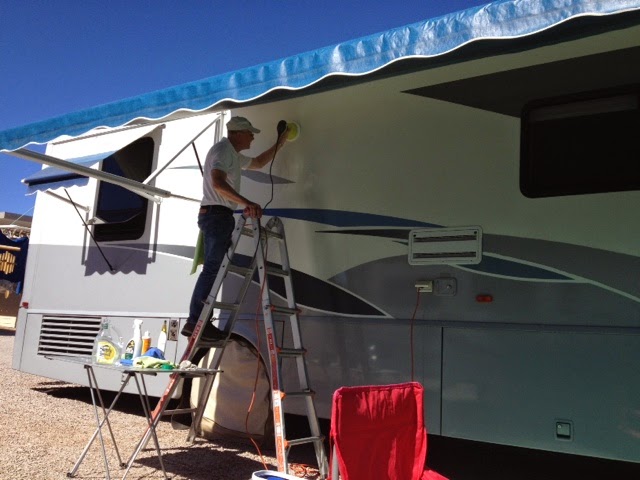 As with any house, RV maintenance is a never-ending priority.  Our coach is only partially painted- the grey color is automotive grade paint, however the white portions are gelcoated fiberglass.  The swooshes are all vinyl decals.  These 3 surfaces all age at different rates and some have better UV resistance than others.  The decals are the first to go, they fade in direct sunlight and start to peel around the edges.  Next is the gelcoated fiberglass which will get dull and chalky with extended exposure to sunlight.  The paint is 12 years old now, and other than rock chips and abrasions, it looks nice and still polishes up to a high shine.  All these surfaces benefit from a good coat of wax and, not surprisingly, continued care can extend their life time. 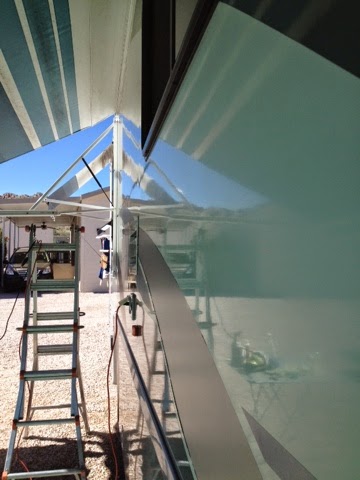 That's how I came to buy an electric orbital buffer and some oxidation remover.  One has to be very careful when using abrasives on a gelcoat, because the coating starts out at between 2 and 3 one hundreths of an inch thick.  To put that is perspective, that the thickness of a business card to about the thickness of a credit card.  If you don't polish enough, the surface looks streaky when you wax it out, and if you polish through the gelcoat, you will lose all the coloring in the gelcoat and have an area that is porous and off-color.  I have heretofore been doing my best to buff out the finish by hand using a towel and a reputable brand of gelcoat oxidation remover.  I admit defeat.  I could get only poor results, leaving me with a shiny, but streaky looking exterior.  With the powered buffer, I was able to get much better results.  There is still some inconsistency in the final finish, but I'd rather go back over and do a little more in those areas, than risk 'burning through' the gelcoat anywhere.  Overall I am very pleased with the results of the power buffer/ polisher.
One of the manufacturers at an RV rally we attended told me the secret to getting a good finish is to take one small area at a time and work on it till you are satisfied- then quit and go have some fun.  Come back a day or a week later and do more as you feel like it.  I am so results-oriented that I have trouble quitting when I should, but I am going to do as he suggested. 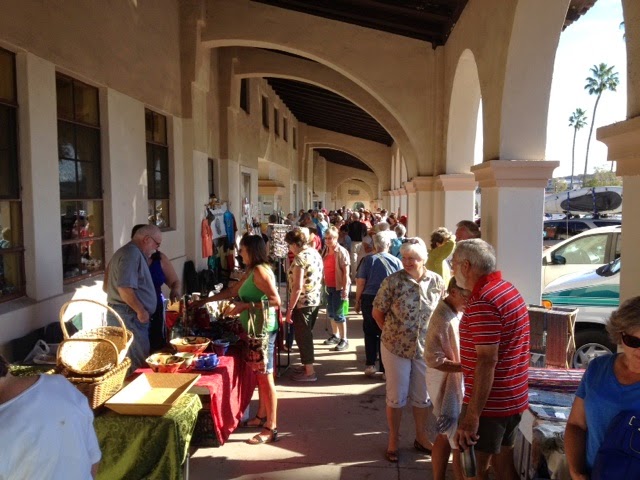 We have finally caught up to two of our RV friends from last year.  Bob and Beverly Burns have been hop-scotching around the state of  Arizona and have finally arrived at Shadow Ridge where we are.  Barb Cowger whom we met at Shadow Ridge last year and who traveled to the Sierra Vista area about the same time as we did, is back too.  We all took off to the Saturday Market in the Ajo Plaza, and later took the 10 mile loop road around the New Cornellia Mine.  Great fun- good friends!