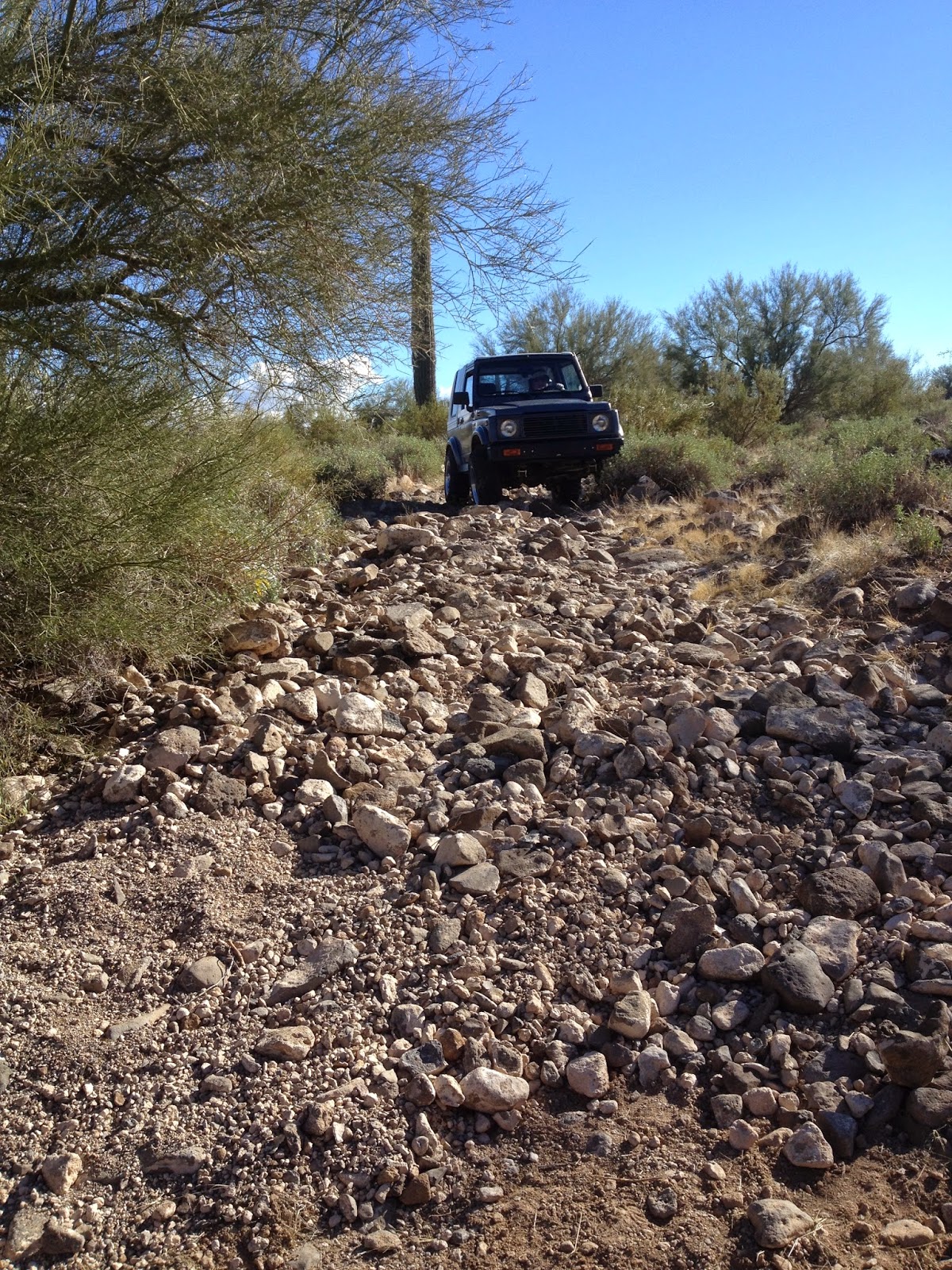 The other day, my friend Mark and I decided to take a hike, and he made the mistake of asking me where I'd like to go.  I told him I'd wanted to see where the road beyond the shooting range goes. According to the map it was only 4 miles from the shooting range north to the Barry M. Goldwater Gunnery Range (BMGR) but this road seems to wind through a canyon that interested me and continues up into the Airforce bombing range.  The road started out innocently enough, but deteriorated fairly quickly to a boulder strewn wash.  I am constantly amazed at the capability of these small Suzukis.  This one is a bone-stock '88 model Samurai with about a 2" lift.  It handled the boulders ruts and washes with very little drama at all. 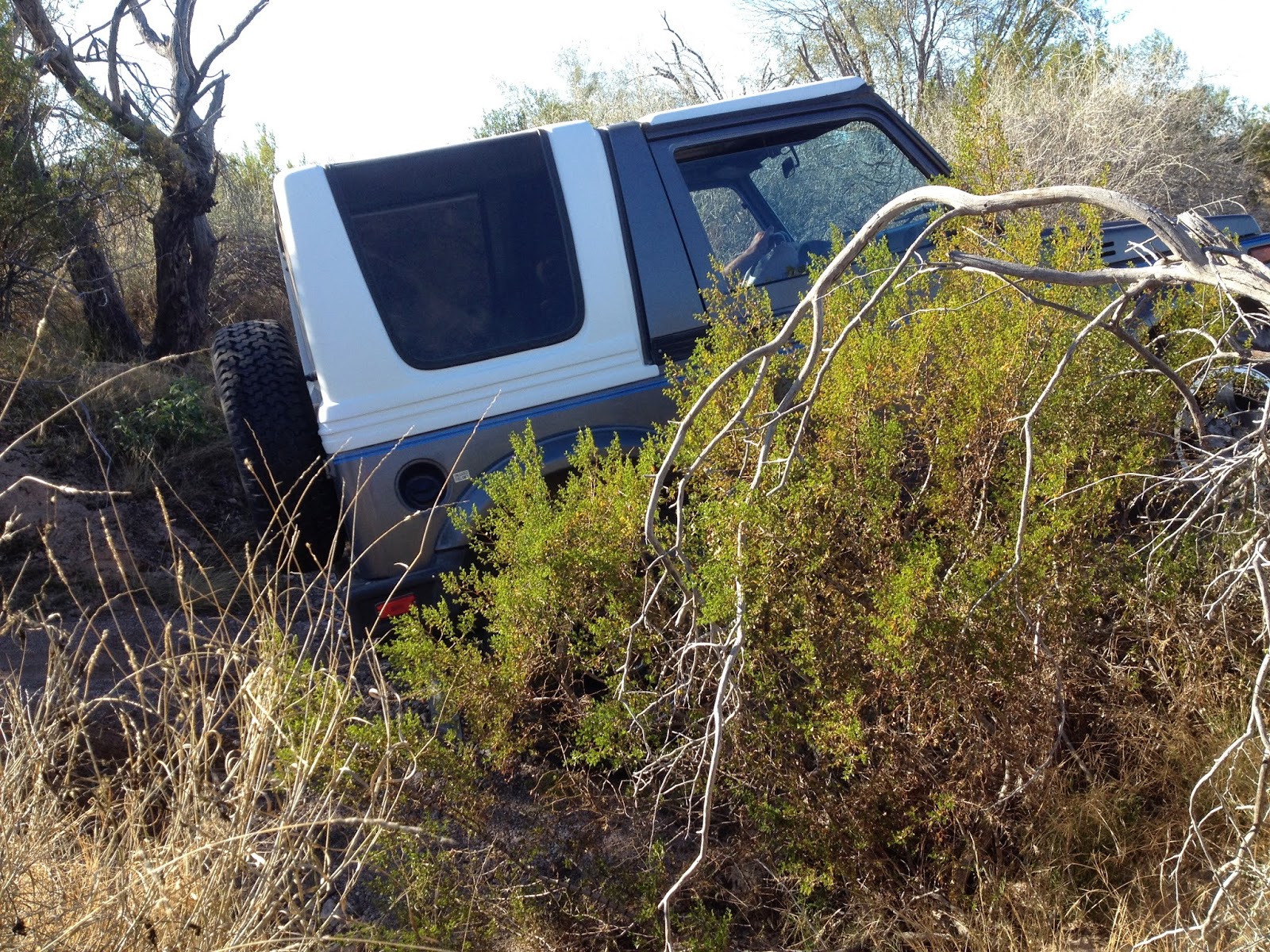 Every time we come to a place where the road is cut by a wash, I keep thinking we'll nose down into the dry streambed and land on the front bumper, and time after time, the suzuki will gently roll through and head up the other side.

It took us about an hour to traverse the 4 miles from the gun club, through the canyon, and out to the flats on the other side.  This is one of those roads that now I've seen it- don't ever need to do it again.

We called into Luke Air Force Base and were allowed into the BMGR (not even a fence out here- just a small metal sign).

Once on the Range the roads improved to the normal awful jeep trails we are used to and we took a left turn and headed back towards route 85 the Ajo- Gila Bend highway. 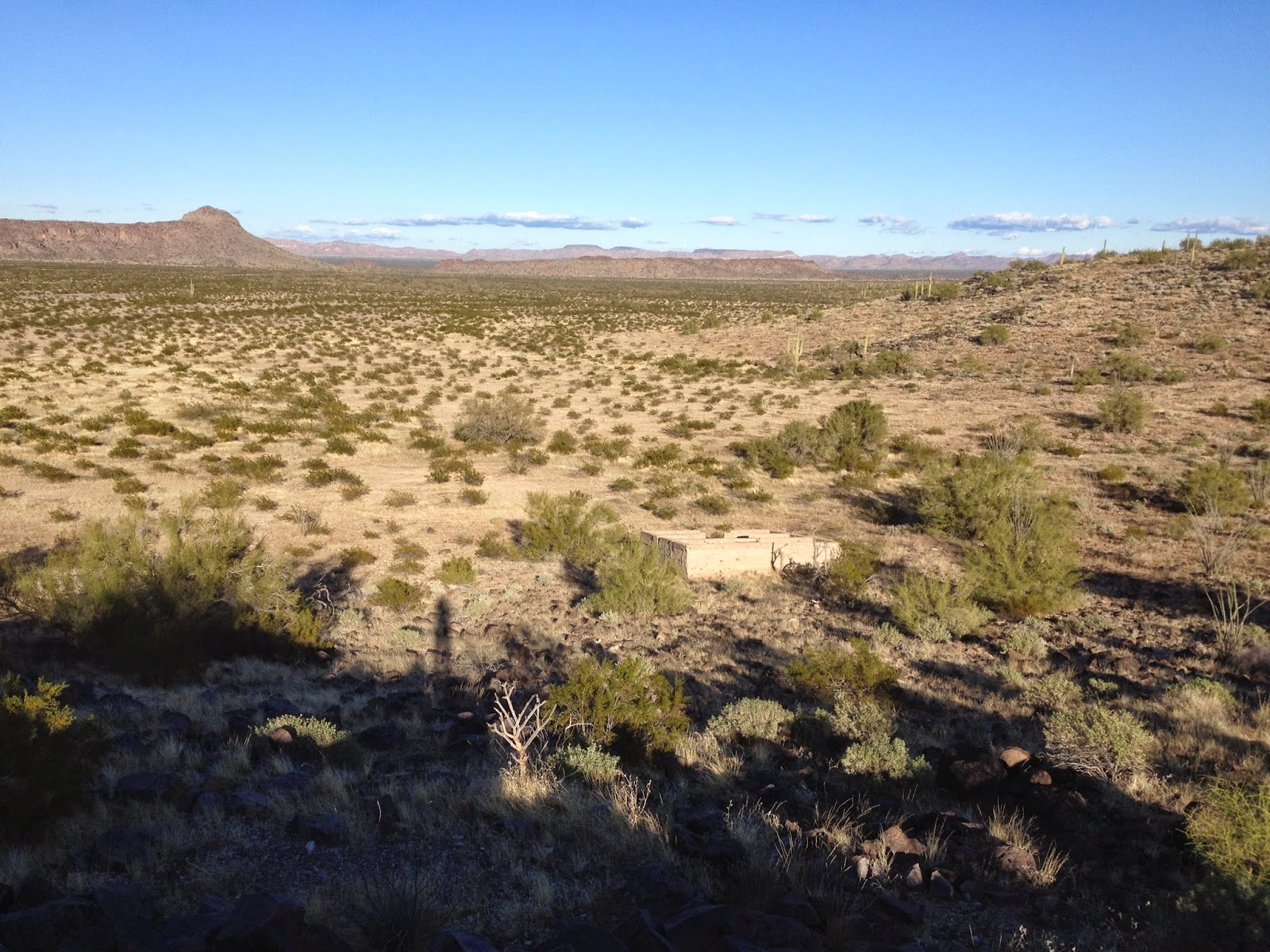 Just before we got to the gate that would lead to the highway, Mark spotted what looked like an old concrete foundation off to the east of us. 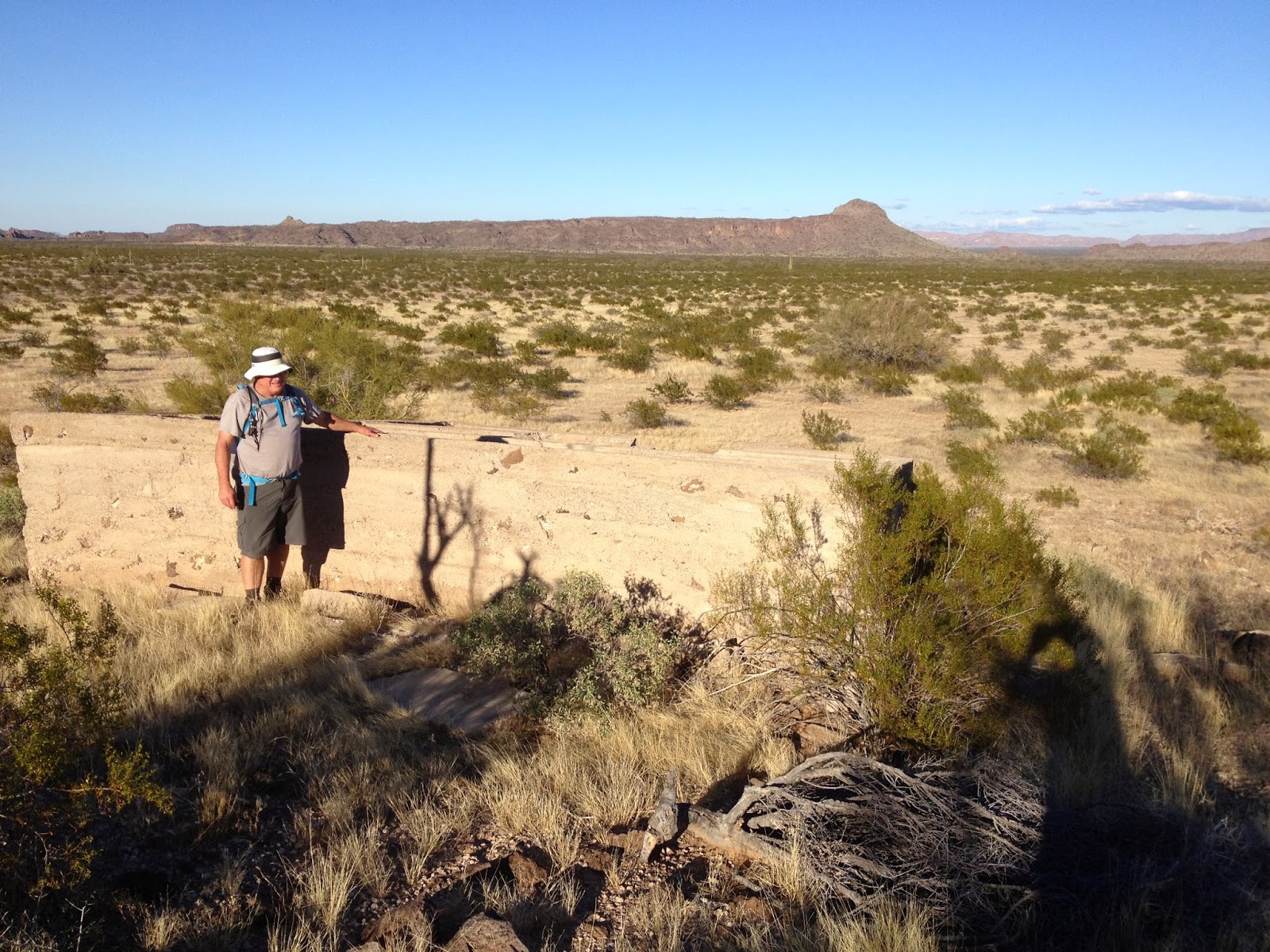 We parked and hiked a short distance off the road to investigate.  I am a little puzzled by this foundation- because it was, for its time, quite labor intensive with 4' tall poured concrete walls.  In addition it was crossed by two interior concrete walls of equal height.  And the whole foundation was poured on the slope- no attempt to level it.  There were large pieces of  broken concrete slab all around, and inside the foundation.  Almost none of the wooden part of the structure still exists (if there was any)  so I have no idea if it had been a house, or a cellar of some kind.  Love a mystery. 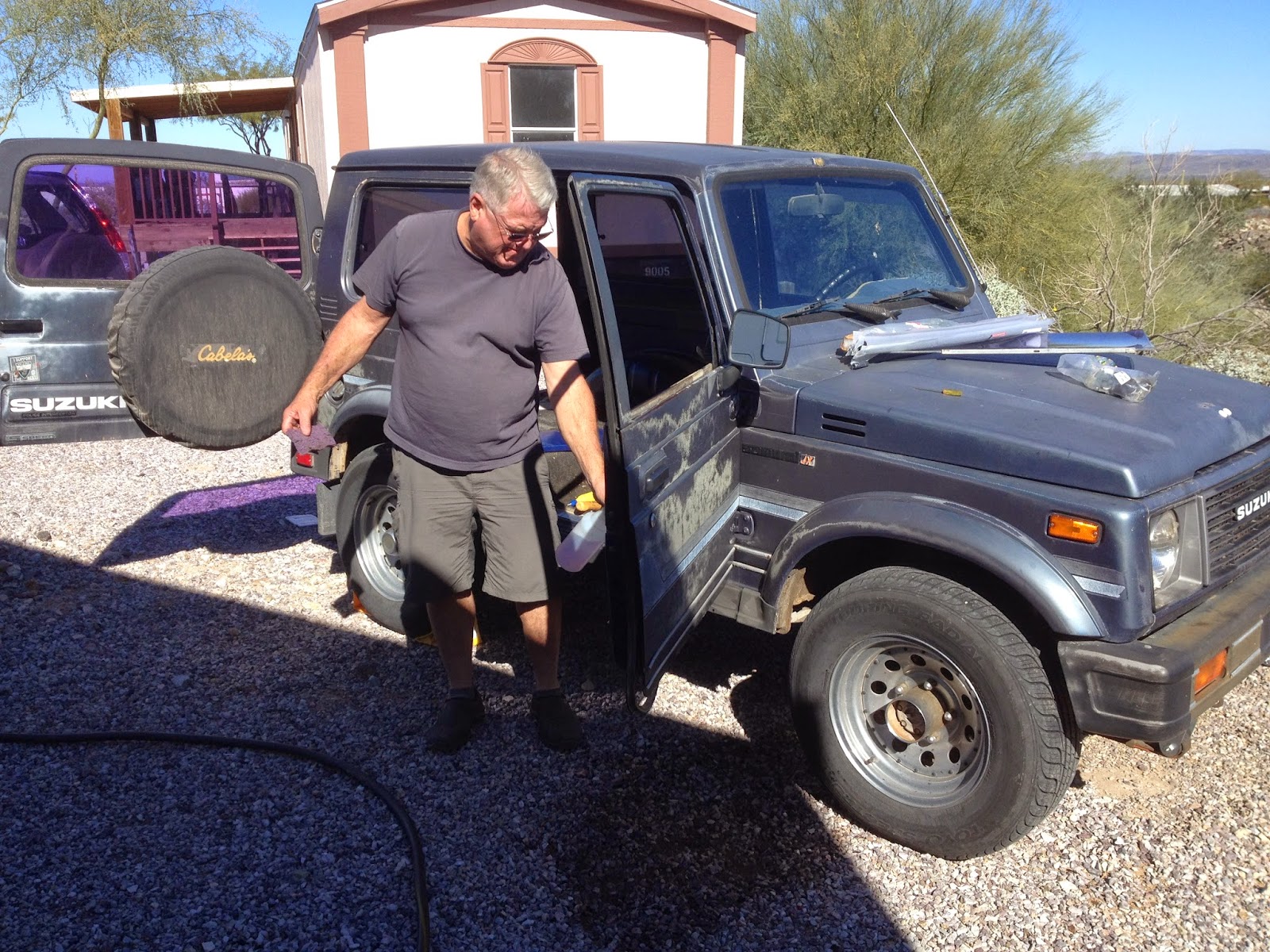 Mark also has an '86 Samauri- this one is a "tin top" with a full metal top on it.  This Sami, Mark wants to take back to Port Orford.  Before he takes it to the rain, however there is some work he wants to do on it.  First priority is to get the windows to roll all the way up again and to get weatherstripping in the openings.

Yesterday he called to see if I'd like to assist with the upgrades as all the parts he ordered had been delivered.  We took the passenger door apart, cleaned all the interior and re-opened the drain channels in the bottom of the door.  Removed the window regulator (raising mechanism) and undercoated the inside of the door.  Installed a new regulator, new door lock body, new glass channel and door weather stripping.  We also peeled the dark film off the glass and cleaned the window up before re-installing it.

It looks and works GREAT!

Next project will be to do the interior- remove seats, carpet and interior upholstered panels, and hose out the whole car.  Then back to doors, and complete the driver's door clean-up and weatherstripping, clean and lube the seat tracks and re-install the seat.  What fun!  The best part is that there is no hurry, he has another one to drive and all winter to finish this one.